The Royal Botanical Gardens led a collaborative to undertake a conservation and land management planning process to protect 4,000 acres of natural Greenbelt lands within the municipalities of Hamilton and Burlington.

The area now referred to as the “Cootes to Escarpment Park System” is over 1500 hectares (3700 acres) of fragmented natural areas currently owned by various conservation groups, and adjacent to one of the Greenbelt’s most urbanized areas, the City of Hamilton. The large area of land and the many stakeholders involved provided a challenge to the Royal Botanical Gardens (RBG) to lead a collaborative process and create a plan to protect this valuable natural asset.

During the first year of the project, RBG hired a full-time project manager and held a public open house to generate interest in the planning process and a Stakeholder Advisory Committee. The open house was well attended with 200 people. There was high interest in the project and participation in the Advisory Committee, which was eventually established with 28 members. RBG also held a workshop for 35 representatives from partner and agency staff to discuss future management of the natural lands. During this time the grantee also established a website and completed the “Phase 1 Background Report” for the land management strategy. A comprehensive report, the Conservation and Land Management Strategy, was the result of the second phase of the project, and is accompanied by the Vision document which was released to the public and media. The grantee reported that the “single most positive element of the project [was] the public’s almost unanimous support for the project and their extensive participation and interest in the process.” Not only was attendance high at open houses and the Advisory Committee, but letters to the editor, editorials and independently-authored newspaper articles also demonstrated strong, vocal public support for protection and enhancing the area. RBG reports that the completion of the Strategy means that they, and the other two charitable partners in the process, are now in a better position to seek funding for specific activities to implement the Vision.

In 2007, the population of the Hamilton area was expected to increase by 37% over 20 years, placing increasing pressure on natural lands so close to the urban boundary, both from development and increased recreational use. These pressures cause habitat fragmentation for flora and fauna, as well as disturbing sensitive habitats where they are intact. The planning process resulted in interest from stakeholders in securing lands and starting stewardship projects to restore degraded areas. Also important, there is now a collective interest in ensuring appropriate, sustainable recreational use in the area to preserve these natural assets. The long-term implementation of this project was important for protecting this key natural heritage area of the Greenbelt, for the benefit of not only Hamilton and Burlington residents, but those in and around the Greenbelt. The partners all brought valuable resources to the implementation phase. Among other implementation activities, a land securement strategy was planned to expand the protection to neighbouring properties and private land owners. In partnership with RBG, the Foundation helped to host a launch event for the Vision in February 2010, a part of the Greenbelt’s 5th Anniversary celebrations, at RBG’s Nature Centre. A short, informal ceremony with dignitaries and remarks was followed by outdoor activities for adults and kids led by partners.

The Royal Botanical Gardens led a collaborative that undertook a conservation and land-management planning process, geared to protecting 4,000 acres of natural Greenbelt lands. 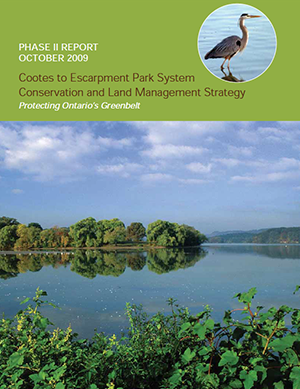