Burkhard's Blog: Recognizing a leader of the Greenbelt

Posted by Alexandra Lucchesi on November 10, 2015 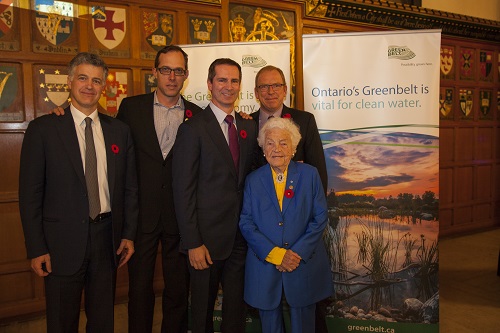 Regardless of where you live in Ontario, you will likely have a strong opinion about Dalton McGuinty's time as Premier. His departure from politics wasn’t entirely smooth. But headlines notwithstanding, Mr. McGuinty has been called "Canada’s greenest premier ever." This is no small part due to his study of biology as an undergraduate student, and with that his understanding of ecosystems and commitment to environmental protection.

Recently, we acknowledged the Premier for his leadership of a legacy—the world's largest Greenbelt. We celebrated that accomplishment with the Friend of the Greenbelt Award at the University of Toronto's Hart House with some 400 guests, delicious Ontario food, and local drinks. And among a throng of devoted Greenbelters, Mr. McGuinty was welcomed with open arms.

What is not a well-known fact is that, when the Premier first was presented with a proposed map of the Greenbelt, his comment was, "Is it big enough to do the job? Can we make it more ambitious?" For me, that showed that the Premier—conversant in understanding of biology—recognized that connectivity and size are important elements of conservation. That is, having small isolated islands of parks and protected areas is not sufficient to guarantee the health of an ecosystem.

This was not the first time the former Premier has been applauded for his tenacity. Another notable occasion was the reception the Premier received in February 2005 when he announced the Greenbelt at the McMichael Art Gallery. When he finished his remarks, the crowd started to clap. But more than that, they started to cheer and whistle—and they didn't stop. I saw a momentary level of embarrassment in the Premier's behavior when he realized they weren't stopping. The crowd kept on clapping and cheering for countless minutes, and he continued standing there, smiling, and gracious in his appreciation for that applause. In fact, many of us later complained about sore palms.

At our award ceremony, Dalton McGuinty echoed this modesty. He was gracious in distributing credit to the Greenbelt to his staff, his Caucus, and in particular then-Minister of Municipal Affairs and Housing John Gerretsen. One particularly noteworthy moment was when the former Premier lamented the lack of federal environmental leadership over the last decade. He did not hold back any criticism or opinions about how that has stained Canada’s international reputation, echoing my own personal thoughts that our country’s international reputation on the environment has been degraded. But despite this, the Greenbelt stands out as the bright light that has withstood the test of time, and Mr. McGuinty is responsible for that.

So whatever you think about Mr. McGuinty's legacy—however the headlines may colour his reputation—one cannot deny his outstanding leadership towards land conservation with the establishment of the Greenbelt. In politics, it's important to recognize individual accomplishments and allow for recognizing the same—even if tarred by different feathers.