Growing Season for the Oshawa Generals 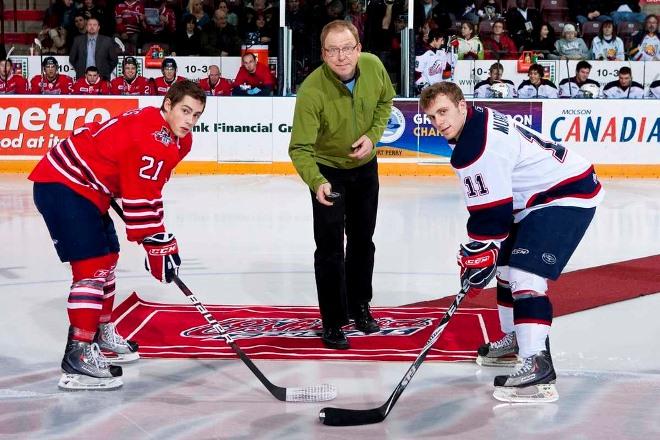 I met with Joe Kantor for lunch this week – a leader in the Oshawa Generals organization. The Generals are a local OHL team with great history and pride in junior hockey. Joe has two young kids and is really committed to incorporating the Generals into the fabric of Oshawa and its surrounding Greenbelt.

While this past season the Generals didn’t make the playoffs, the team is young and they’re building a long-term vision for the hockey club. Over a toasted club and caesar salad, Joe told me that there is a great deal of optimism for the hockey club now that Adam Graves, future Hall of Famer and a two-time Stanley Cup champion (with the Edmonton Oilers and the New York Rangers), has bought into the team.

Earlier in the season, the Greenbelt had a presence at a home game against the Saginaw Spirit and it was a great deal of fun. I got to drop the puck (which I had never done before); we spoke to thousands of fans about the Greenbelt’s importance; and we celebrated a victory for the home team.

Junior hockey is one of those quintessential Canadian things that I haven’t personally lived. Growing up in Germany, soccer was king. But as an immigrant and a hockey fan, I get it.

There are many OHL teams around the Greenbelt, and in some ways I wish we could do a Greenbelt Cup. One based on hockey excellence and talent, while appreciating the leadership the Greenbelt brings to our lives. The Cup could recognize that what nurtures the team are its players, who are in turn nurtured by the Greenbelt.