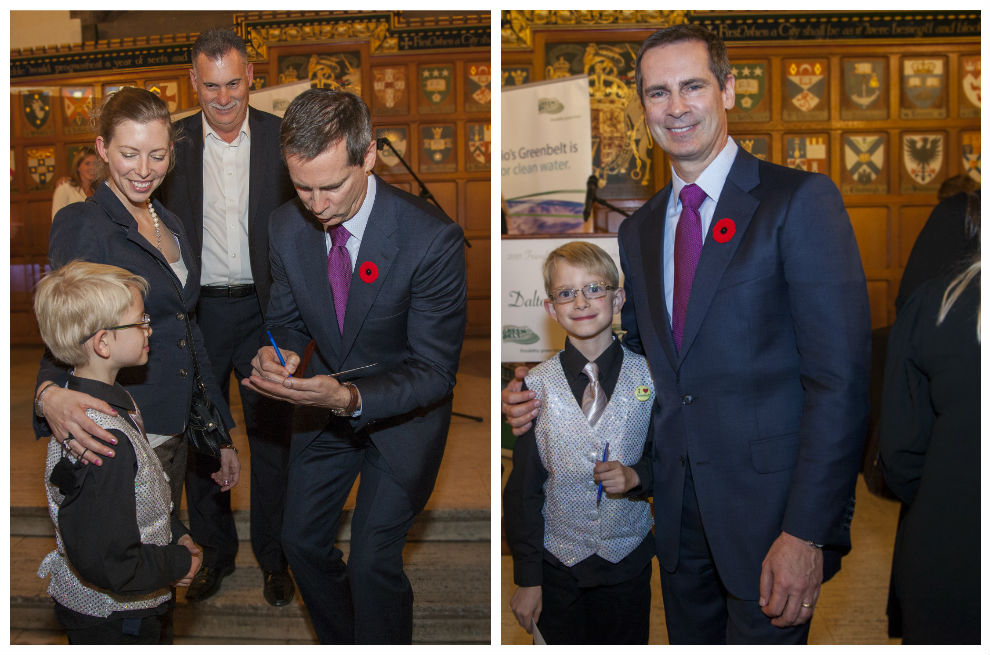 Some 400 guests joined us for the celebration - from our partners and grantees, to our Greenbelt Friends and champions, to elected officials and long-time Greenbelt activists.

But among all our notable guests, it was our smallest attendee who made the biggest impression. At 7-years old, Alexander—a Friend of the Greenbelt and dedicated environmentalist—was not only our youngest guest, he was also our most enthusiastic.

After seeing Alexander work the crowd like a pro, we wanted to get his thoughts on the evening, on the Greenbelt, and on meeting the former Premier.

Here’s what he had to say!

… And you'll faint when you hear this: I got his autograph!

I think about the issues like if they build airports, grass will be wiped right out and animals will get killed. And if there's humans walking by the construction, even humans can get killed. So I'm trying to protect humans, grass, animals, and the construction workers who are also humans. And the crops, too.

The Greenbelt should be protected because it's part of nature, and I'm an Earth Ranger. In fact I met the head of Earth Rangers at the celebration!

On his goals for the future
One of my goals for the future is to plant some trees on Mars and owning my own whole entire planet. And also melting all the water, because you can't live without water. Everybody knows that for sure. I'm going to accomplish that dream by taking a two year long trip to Mars, planting a bunch of trees with my mom, and then when the trees are done growing a bunch of people from Earth can move in.