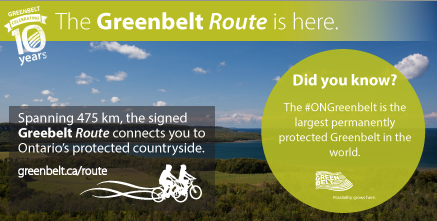 For the first time, one of Canada’s preeminent cycling events, the Great Waterfront Trail Adventure (GWTA), is moving away from the water and into Ontario’s protected countryside. The GWTA is a six-day ride (August 16-21) that launches new 475 km Greenbelt Route, spanning seven regions from Northumberland to Niagara.

The opening of the Greenbelt Route celebrates the 10th Anniversary of Ontario's Greenbelt, and marks a decade of protected green space and fertile farmland.

“Just as the Waterfront Trail has done, the Greenbelt Route will help boost Ontario’s reputation as a premier cycling destination,” said Marlaine Koehler, Executive Director of the Waterfront Regeneration Trust. “The new route will help serve the growing cycle tourism industry in Ontario, which brings in millions of dollars every year, and give locals and tourists access to attractions, natural landmarks and conservation areas.”

The Greenbelt Route is the result of a three-year initiative funded by the Friends of the Greenbelt Foundation and led by the Waterfront Regeneration Trust in collaboration with the 27 communities through which the route runs.

Riders in the GWTA Special Greenbelt Route Edition will have time to explore those same communities, to shop, taste the local wines and foods, and be one of the first to take on the challenge of the brand new Greenbelt Route.