In partnership with Green Infrastructure Ontario Coalition, Toronto and Region Conservation Authority, Re:Public Urbanism, and the Ontario Parks Association, Improving Access to Large Parks in Ontario’s Golden Horseshoe: Policy, Planning, and Funding Strategies presents an analysis of current and planned large park distribution and accessibility within the Golden Horseshoe (GH) region, and proposes strategies to overcome barriers to the equitable funding, planning, and establishment of new large parks in the region.

The report assesses which areas of the Golden Horseshoe have the lowest accessibility to existing and planned large parks based on various modes of transportation, and conducts an equality analysis using census data to identify areas in greatest need of parkland creation. Based on these findings, the report identifies exemplary practices and transferrable models from across Canada and around the world that can inform large park planning in the Golden Horseshoe, and proposes strategies to overcome barriers to the equitable funding, planning, and establishment of new large parks in the region.

Two million people in the Golden Horseshoe are currently living in neighbourhoods with low accessibility to parks and distribution within the region is not equal."

This report is a follow-up to the State of Large Parks in Ontario’s Golden Horseshoe, published in 2019. That report concluded that there is a shortage of large park supply across the region, and this limited supply would not keep up with population growth, which is expected to reach 15 million by 2051. It also found that there is a growing gap in government capacity for planning, funding, establishing, and managing large parks, and identified a need for further research on policy and funding solutions to address this gap. These early findings were the inspiration for this new research.

Possible approaches are detailed within the report, including the reconfiguration of parkland dedication bylaws under Section 42 of the Planning Act to generate revenue through cash-in-lieu payments; incorporating green infrastructure assets into asset management plans; updating existing provincial and federal infrastructure funding programs; and addressing issues of liability for different landholders to increase the viability of including land trusts and non-conventional greenspaces in the parks network. The report also recommends that funders and decision-makers should be considering ways to fund and deliver programming to reduce barriers and improve equitable access to existing parks. The report also cites examples of local programs and transferable models to develop best practices to increase equitable access across the region. 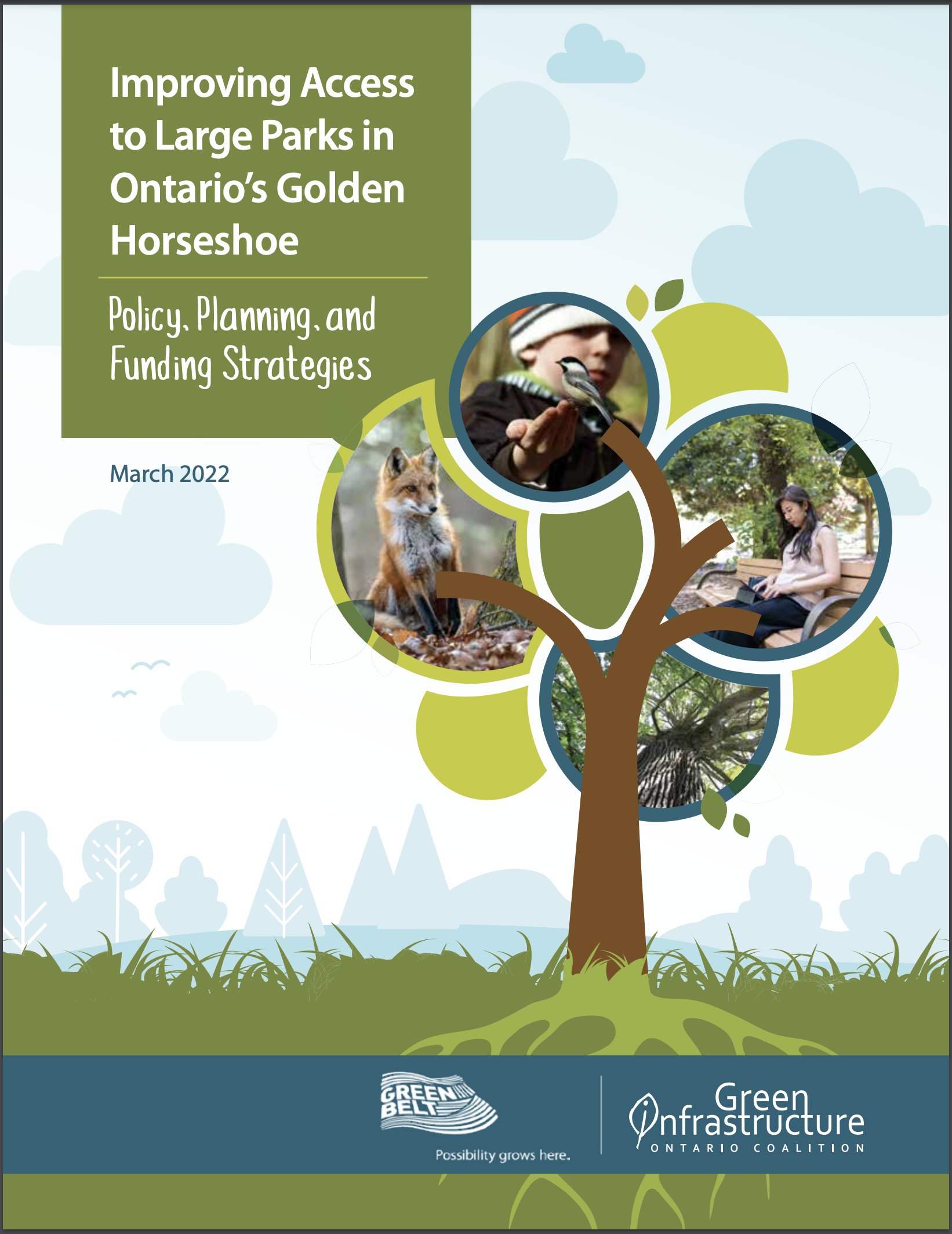 The research findings that served as the basis of this report were provided by a parkland inventory and community needs assessment using Geographic Information Systems analysis conducted by Re: Public Urbanism. It provided the spatial and statistical analysis of the distribution and accessibility of large parkland in the Golden Horseshoe which informed the policy analysis and conclusions of this report.

The findings from this analysis are presented in the technical report below, Greenbelt Foundation Large Parks Community Needs Analysis and Planned Parkland Inventory: Technical Report. The findings identified within this report are intended to be presented in conjunction with Improving Access to Large Parks in Ontario’s Golden Horseshoe: Policy, Planning, and Funding Strategies, in order to provide a comprehensive analysis of the state of large parks in the Golden Horseshoe.

For additional details or a more in-depth look at the analysis, please read the full Technical Report here: 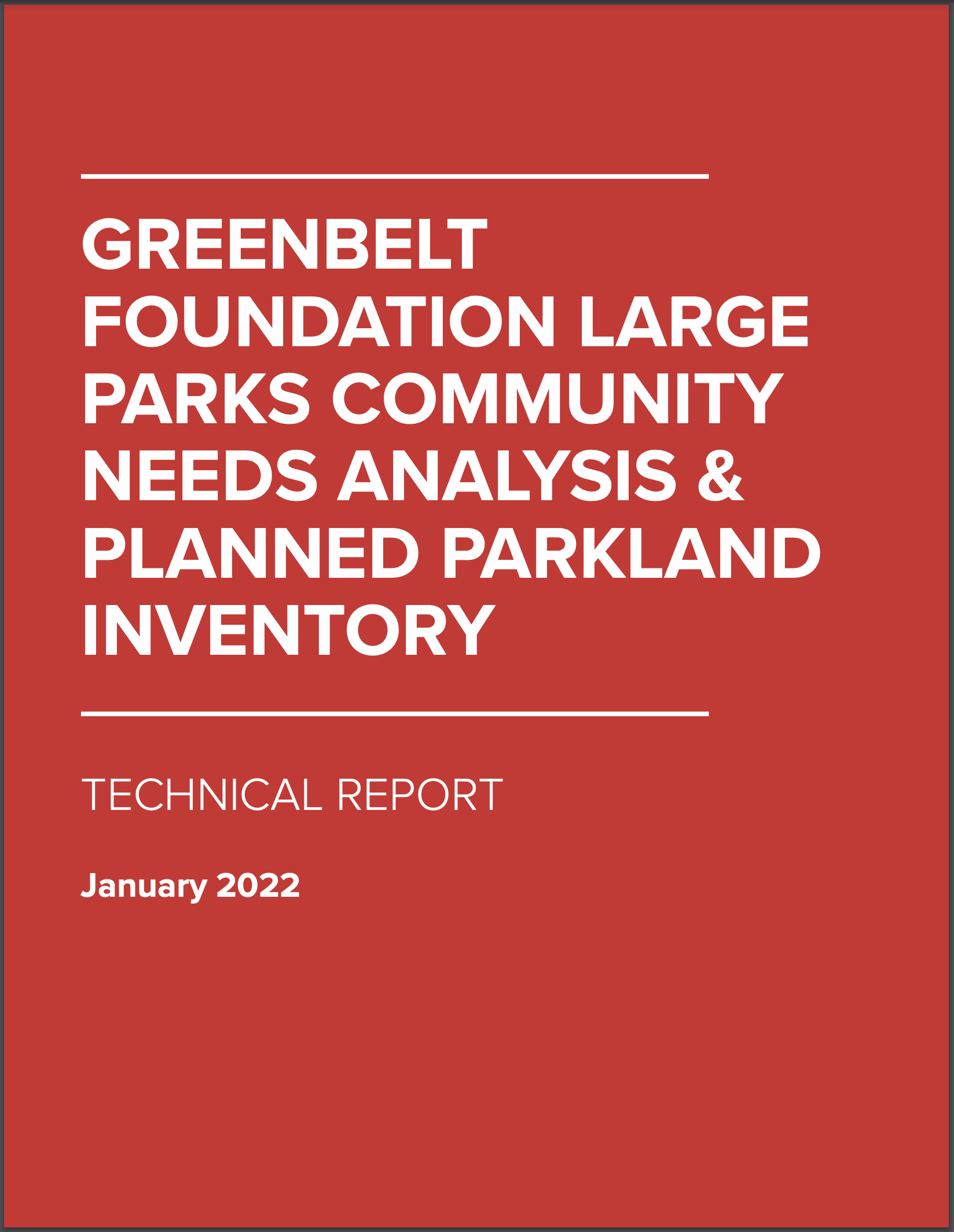 Use our web application to review the existing and planned parks across the Golden Horseshoe, and filter by specific census information on the score values HERE. 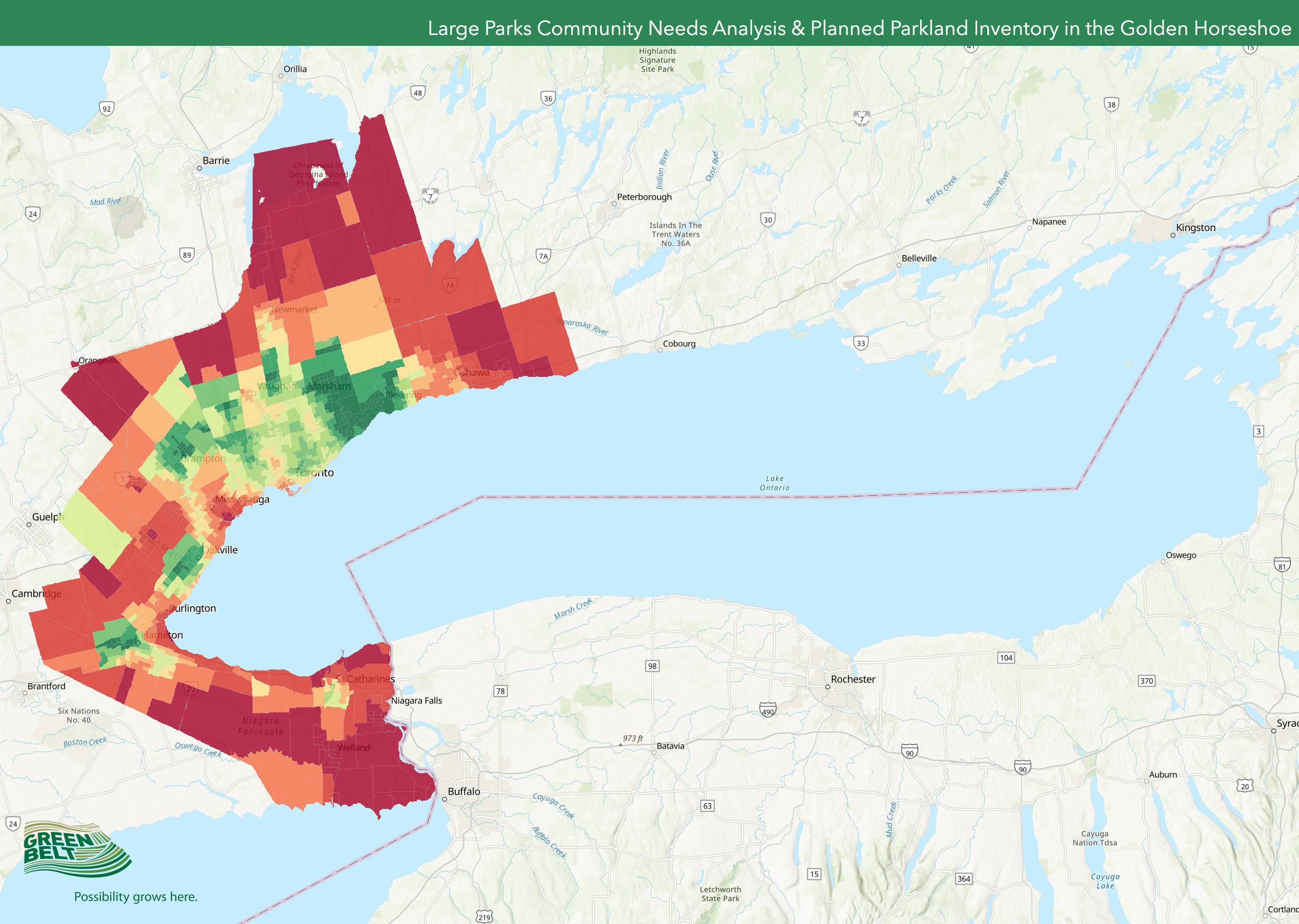