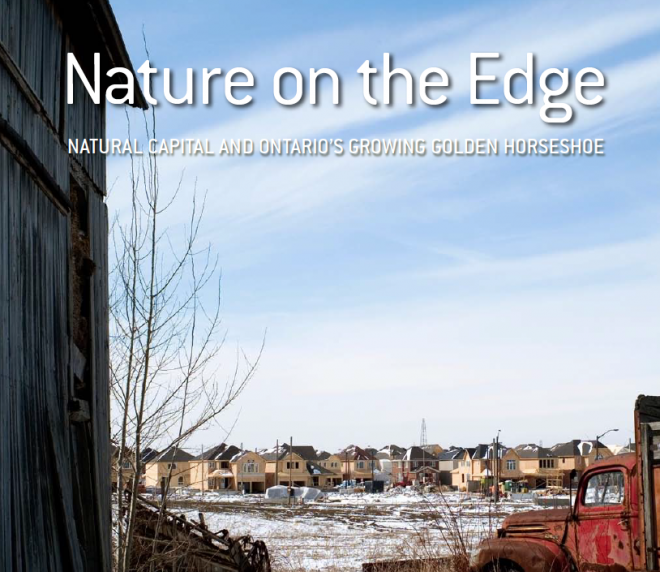 TORONTO — A patchwork of remaining farmland and green space in Ontario's rapidly growing Golden Horseshoe region provides millions of dollars in services and benefits, according to a David Suzuki Foundation study. The report examines the Whitebelt Study Area, more than 94,000 hectares of unprotected farmland, fields and forests in the municipalities of Durham, York, Halton, Hamilton and Peel. The fate of these lands remains uncertain as the provincial government considers whether to approve proposals to develop prime farmland and green space as the region grows.

"Despite having sprawl-curbing provincial policies on the books, like the Greenbelt Act and Greater Golden Horseshoe Growth Plan, these green spaces closest to urban centres are under intense development pressure for sprawling new housing estates, highways, big-box stores and other infrastructure," said Faisal Moola, director of Ontario programs at the David Suzuki Foundation. "This study demonstrates why municipalities and the Government of Ontario should redouble their efforts to protect our remaining farmland and natural green space from costly and polluting urban sprawl."

Using valuation techniques from the field of natural capital economics, the study estimates that the Whitebelt Study Area's rich tapestry of natural and agricultural assets provides more than $122 million in economic benefits a year for communities throughout the region. These values are derived by estimating the value of services and benefits provided by ecosystems, such as naturally cleaning air, filtering water and offering flood protection.

Although these lands are currently farms and green space, municipalities have proposed developing more than 10,000 hectares over the next three decades. This is in addition to 52,000 hectares that the province already approved for development before the current land budgeting process.

"Canada has relatively little good-quality farmland and most of our best farmland is found in the Greater Golden Horseshoe, yet we're losing our valuable natural assets at a blistering rate to sprawling urban expansion," Moola said. "If we value local food and want to maintain the critical benefits that nature provides to our communities, our laws, policies and actions should put food and water first."

The study shows wetlands and forests provide the greatest estimated annual value($39 and $28 million), while agricultural lands provide ecosystem services worth an estimated $53 million per year. Durham Region holds the largest share of natural capital in the study area, with $36 million in benefits, followed by Halton ($28 million), York and Peel Regions ($24 million each) and Hamilton ($11 million).