Since its launch, the exhibit has circulated to 25 venues across the Golden Horseshoe, and has had exposure to over 450,000 people.

Supporting the Toronto Region Conservation Authority, the Conservation Foundation of Greater Toronto works to make Toronto a greener and healthier place to live, and uses a major traveling Greenbelt exhibit to help spread the word.

Thousands of visitors to the GTA’s conservation areas can explore the Greenbelt through an interpretive traveling exhibit that weaves a story celebrating the past and present farming and rural cultures of communities in the Greenbelt, and highlights important natural features.

The Green Living Show, held from April 27-29, showcases environmentally friendly consumer products and services in energy, home and garden, building, recreation, transportation, food, fashion and health. Visitors and participants of The Green Living Show will see first-hand what the Greenbelt has to offer, showcasing healthy foods and beverages, an abundance of recreational opportunities, and the significance of the natural environment that is protected by the Greenbelt.

A forum is held where the agricultural community and policy makers can speak about Greenbelt issues together. The forum is designed to promote a clear understanding of the need and importance of Ontario’s Greenbelt.

The Greenbelt is highlighted as the title sponsor of “The Taste of Niagara Fine Foods and Wines” event at the 5th Annual Ontario Fruit and Vegetable Convention. The convention attracts over 1,100 participants including growers, allied trades, government managers and staff. Over 800 people attend this event, featuring Niagara chefs serving local food and wine.

Ontario Fruit and Vegetable Growers' Association represents 28 commodity-based farm associations in the province and serves as the official representative for the province's fruit and vegetable sector to national and international bodies.

This is a sponsorship of the Planet In Focus Film Festival screens Sarah Harmer's film 'Escarpment Blues,' which is followed by a panel discussion. Escarpment Blues, directed by Andy Keen, chronicles the activist singer’s fight to stop the destruction of the Niagara Escarpment and preserve Ontario’s Greenbelt. Harmer’s I Love the Escarpment Tour was captured on film last summer as she and her band played in outdoor theaters and community halls along the escarpment’s Bruce Trail. Proceeds of the tour go to Protecting Escarpment Rural Land (PERL), a local group Sarah co-founded to oppose a new quarry proposal near her home in North Burlington. The mine threatens to destroy the water table, habitat and the unique escarpment lands, designated as a World Biosphere Reserve by the United Nations. Sarah Harmer is this year’s recipient of The “Friend of the Greenbelt Award.”

Created in 1995 by the Province of Ontario to protect the Rouge River, Rouge Park is currently the largest urban park in North America at 47 square kilometers in size, housing 762 plant species, 225 bird species, 55 fish species, 27 mammal species, and 19 reptile and amphibian species.

Situated close to urban centers, Rouge Park is composed of a variety of natural landscapes, from rolling hills to vast wetlands and sandy beaches, serving as an important region of the Greenbelt to focus on for restoration of local biodiversity. 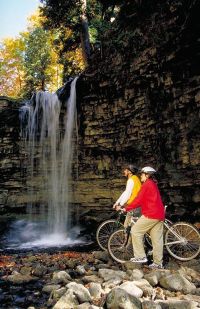 The Greenbelt serves an important function as a natural air filter. The Ontario Medical Association estimates the costs of air pollution in Ontario to be 5,800 premature deaths, 17,000 hospital admittances, 60,000 emergency room visits, and a total of $7,800,000,000 in health care cost, lost work time, and productivity.

Raising awareness of the Greenbelt’s value is one of the most important steps in protecting it. Ontario Nature has led the way by performing outreach and education to local leaders and the public on the beneficial health values associated with the Greenbelt.

Showcasing the efforts of farmers and community volunteers to steward the land is a proud and productive opportunity. In partnership with the Ontario College of Family Physicians. Ontario Nature is creating booklets to highlight the significance of a farmer’s work to protecting the Greenbelt’s water resources, forests, and unique habitats, and to link rural and urban residents with the building blocks of a healthy lifestyle the Greenbelt has to offer.