On Tuesday, December 6, members of the Ontario Greenbelt Alliance headed to the Ontario legislature at Queen's Park to meet with MPPs and support the campaign to #GrowOurGB. Here are some highlights! 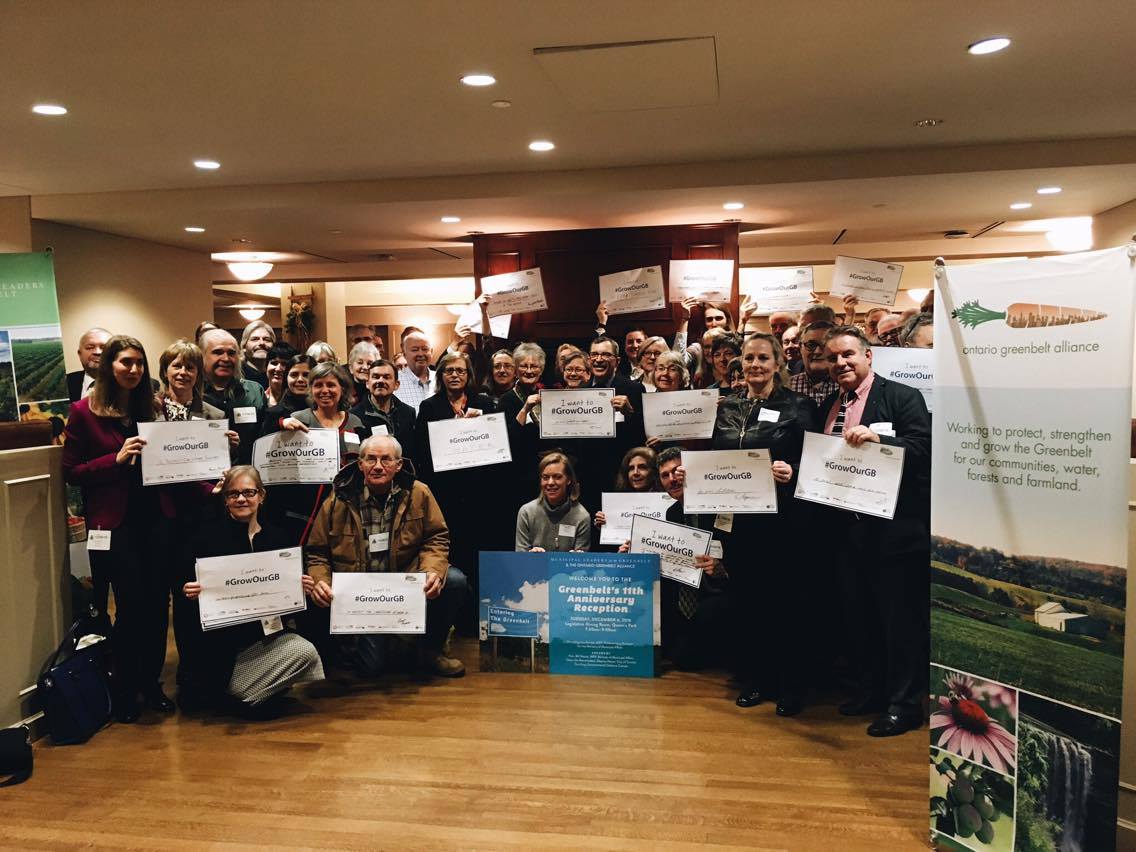 Members of the Ontario Greenbelt Alliance gather at Queen's Park

The feedback period for the recent Coordinated Land Use Planning Review ended on October 31. The Province is now reviewing submissions from the public, municipalities, community groups, and others, including over 35,000 letters sent by residents in support of protecting and growing the Greenbelt. Amendments to the Greenbelt and Growth Plans are expected in late winter or spring 2017. To show support for the Greenbelt while the Province deliberates, 70 OGA members and Municipal Leaders for the Greenbelt, as well as 25 MPPs, gathered for an early breakfast at Queen's Park. 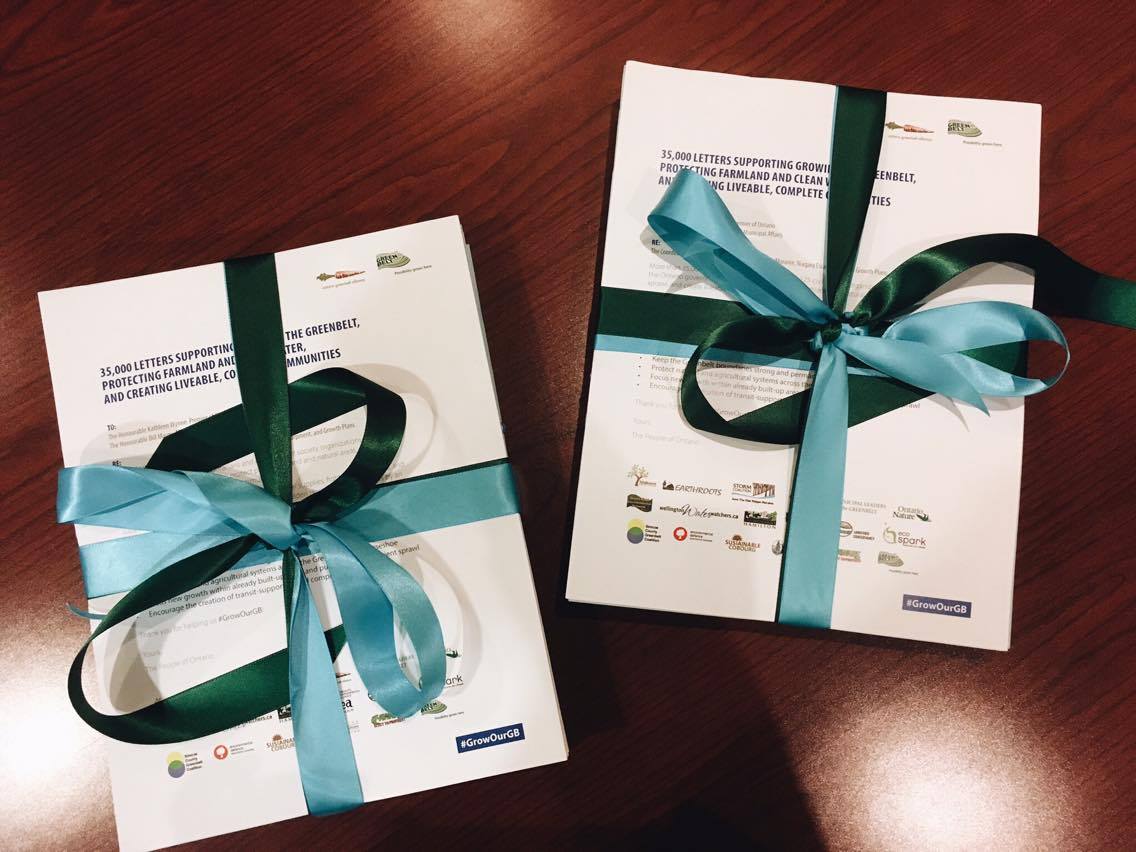 Members of the OGA delivered over 35,000 signatures to Minister Mauro and Premiere Wynne

There was representation from across the Greenbelt, including the Friends of the Greenbelt Foundation, Environmental Defence, Toronto Environmental Alliance, Simcoe County Greenbelt Coalition, Save the Oak Ridges Moraine (STORM), Environment Hamilton, Oakville Green, Sustainable Brant and the Langford Conservancy, EcoSpark, Wellington Water Watchers, and more!

Municipal Leaders for the Greenbelt expressed strong support for growing the Greenbelt. In particular, Mayor Steve Parrish of Ajax expressed the need to protect the headwaters of Carruthers Creek, while Deputy Toronto Mayor Glenn De Baeremaeker called for the freezing of municipal boundaries for the next 10 years to promote smart growth and protect farmland.

35,000 emails and letters sent to @Kathleen_Wynne @BillMauroMPP in support of #GrowourGB efforts. Truly impressive. Proud to be part of this https://t.co/FRXDUwqt5s

Minister of Municipal Affairs Bill Mauro thanked the OGA for its efforts, and acknowledged the receipt of over 35,000 letters. He expressed excitement at the new protections for 21 urban river valleys and seven coastal wetlands. 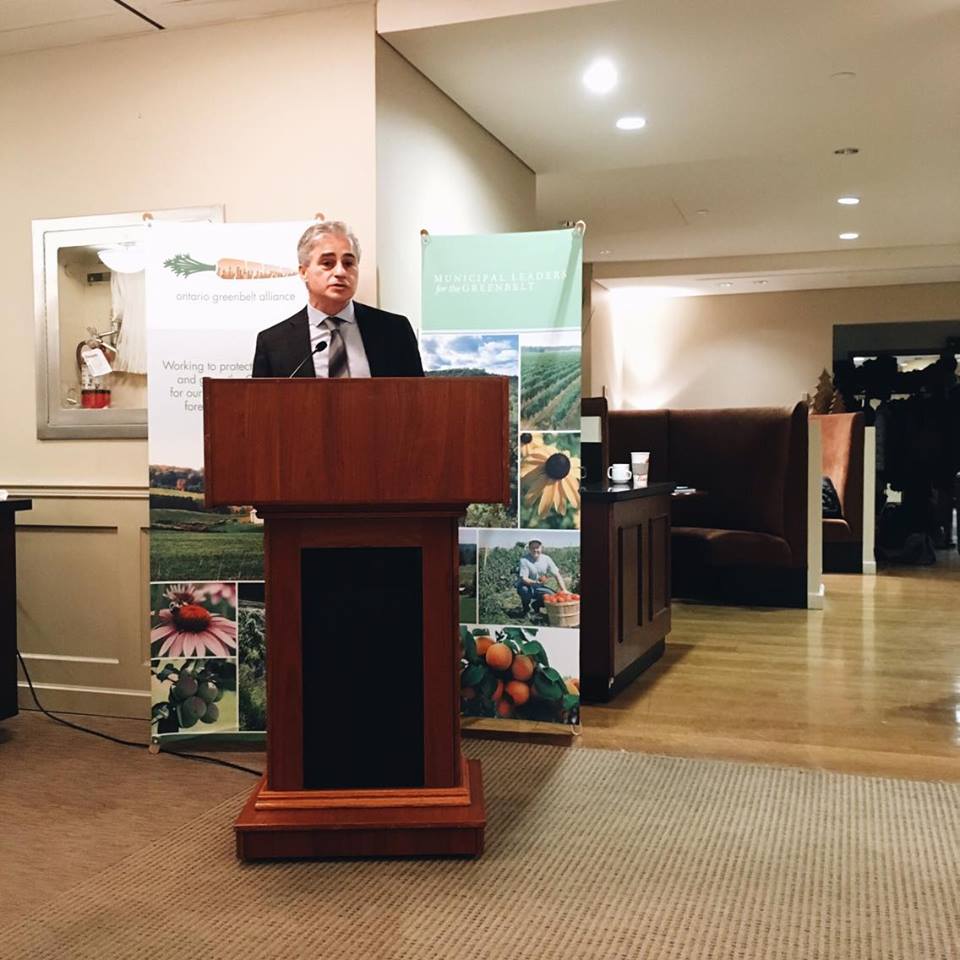 Ernie Hardeman, Agriculture and Food Critic for the Progressive Conservatives also commended the Ontario Greenbelt for supporting local food and farming. He stated, "On behalf of Patrick Brown and the PC Caucus, we totally support the Greenbelt."

Take a look a this Twitter Moment for highlights from the morning as they happened, including more photos, quotes from speakers, and insights from OGA members.

Thank you to everyone who took part in the day, and to supporters across the Greenbelt! While we wait for the Province's amendments, you can still send a letter to Minister of Municipal Affairs Mauro to support the protection and expansion of the Greenbelt. It's critical that we ensure Greenbelt boundaries are permanently protected from unbridled sprawl, and that the Growth Plan is working to help cities and growing municipalities develop responsibly.

Across U-Hub’s Day Trip to Kortright Centre for Conservation

On a sunny Saturday in late October, Across U-Hub took 30 young adults to immerse themselves in the spectacular colours of fall at Kortright Centre for Conservation in Vaughan. 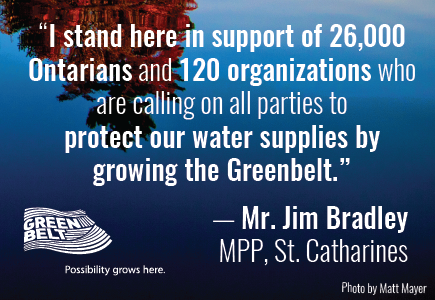 A new report, Ontario’s Good Fortune: Appreciating the Greenbelt’s Natural Capital from Green Analytics and Sustainable Prosperity finds that in addition to storing over $11.17B of carbon, the Greenbelt provides $3.2B annually in ecosystem services to the region. The report, commissioned by the Friends of the Greenbelt Foundation, assessed the value of final services provided by the Greenbelt that Ontario residents benefit from. 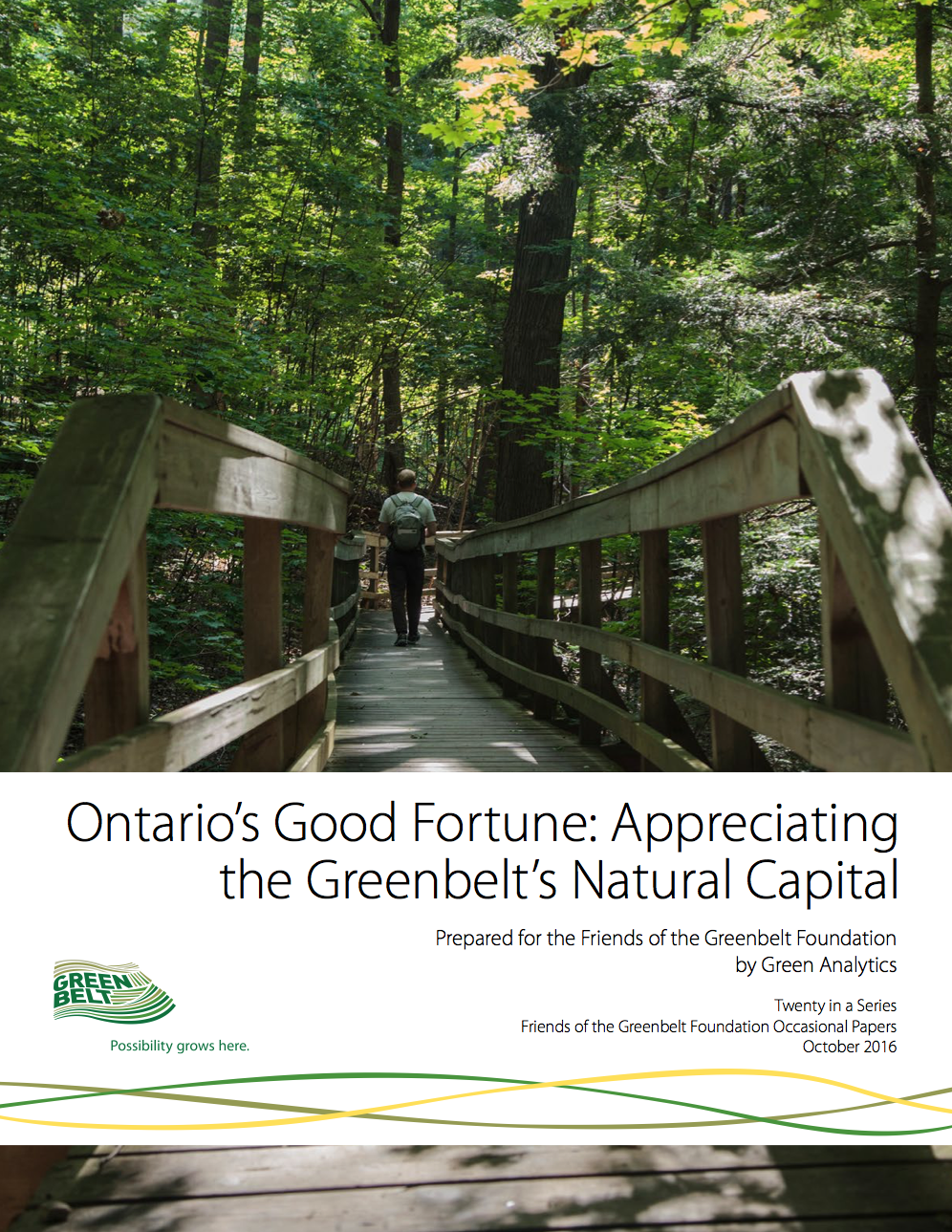 Last month, groups from Family Service Toronto and the Brampton Multicultural Centre visited Kortright Centre for Conservation near Kleinburg. Read about their experiences, from interactive nature walks to greenhouses and saying hello to some sheep! 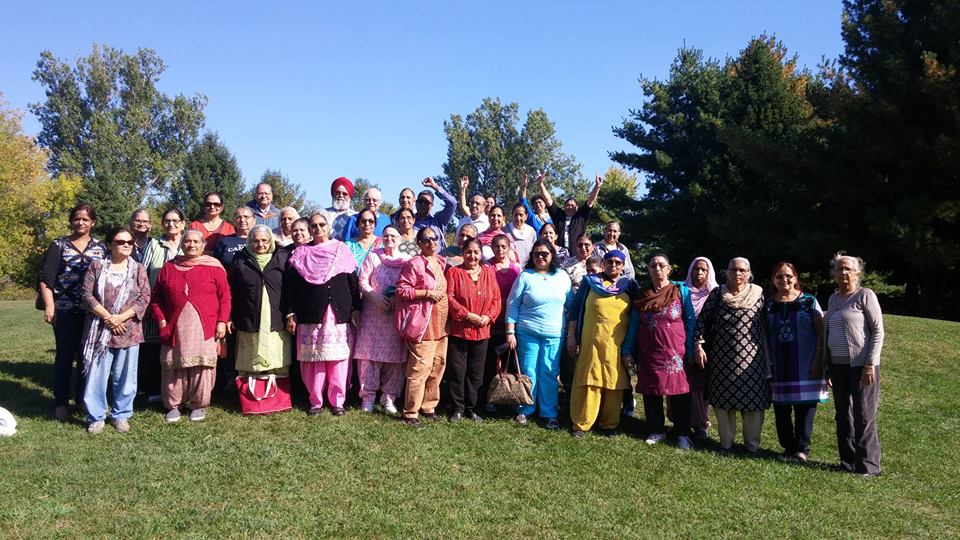 I’m very excited about our upcoming report on valuing the natural capital of the Greenbelt. It helps make it clear that nearly 9 million people are taking advantage of having the world’s largest Greenbelt on their doorsteps, as well as benefiting in many other ways from its natural assets.

Understanding the value of our natural capital is vital to making informed, responsible decisions. This primer explains what natural capital valuation is and how it works. 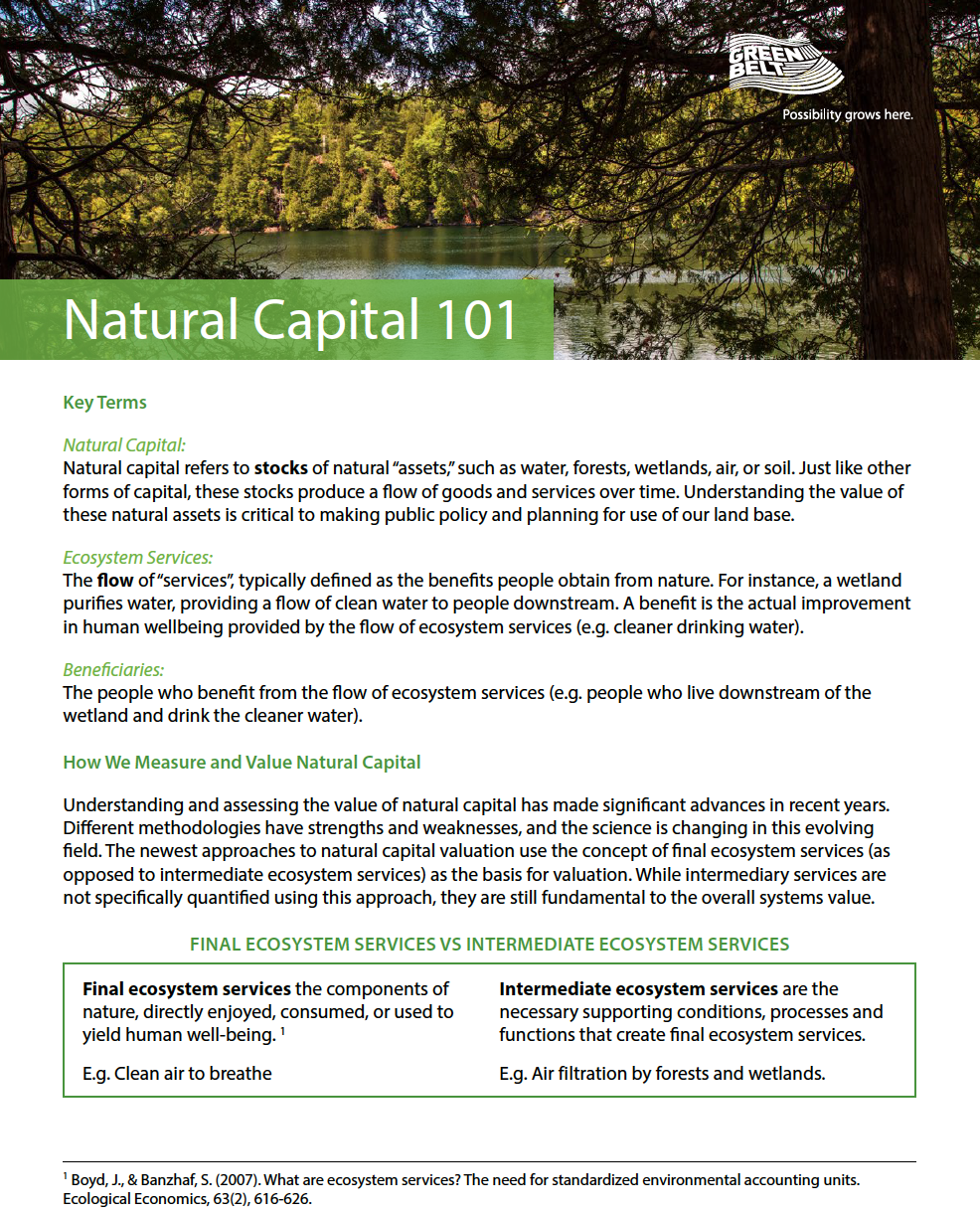 Our top 5 highlights of the Land Use Planning Review

In February 2015, Ontario embarked on a review of four land use plans, including the Greenbelt Plan and the Growth Plan for the Greater Golden Horseshoe (GGH). The 18-month review period included town hall meetings and open houses, an advisory panel report, and an updated vision for the future of our region. The feedback period drew to a close on Monday, October 31. The Province will now review the thousands of letters you've sent and announce final amendments in spring 2017. Here are our top five highlights of the 2015 Co-ordinated Land Use Planning Review.

Throughout October, as the deadline for the Co-ordinated Land Use Planning Review approached, local organizations galvanized support for Growing Our Greenbelt. Here is a round-up of recent events by partners, friends, and relevant organizations. Thank you for your continued support and research!

By: Chinese Family Services of Ontario

October 15 was a very exciting day for a group of 90 new Canadians, mostly families, from Chinese Family Services of Ontario. Given that they are all new to the country, the day trip to Mountsberg Conservation Area in Hamilton was the very first time most of them had found an opportunity to experience Ontario’s beautiful countryside. 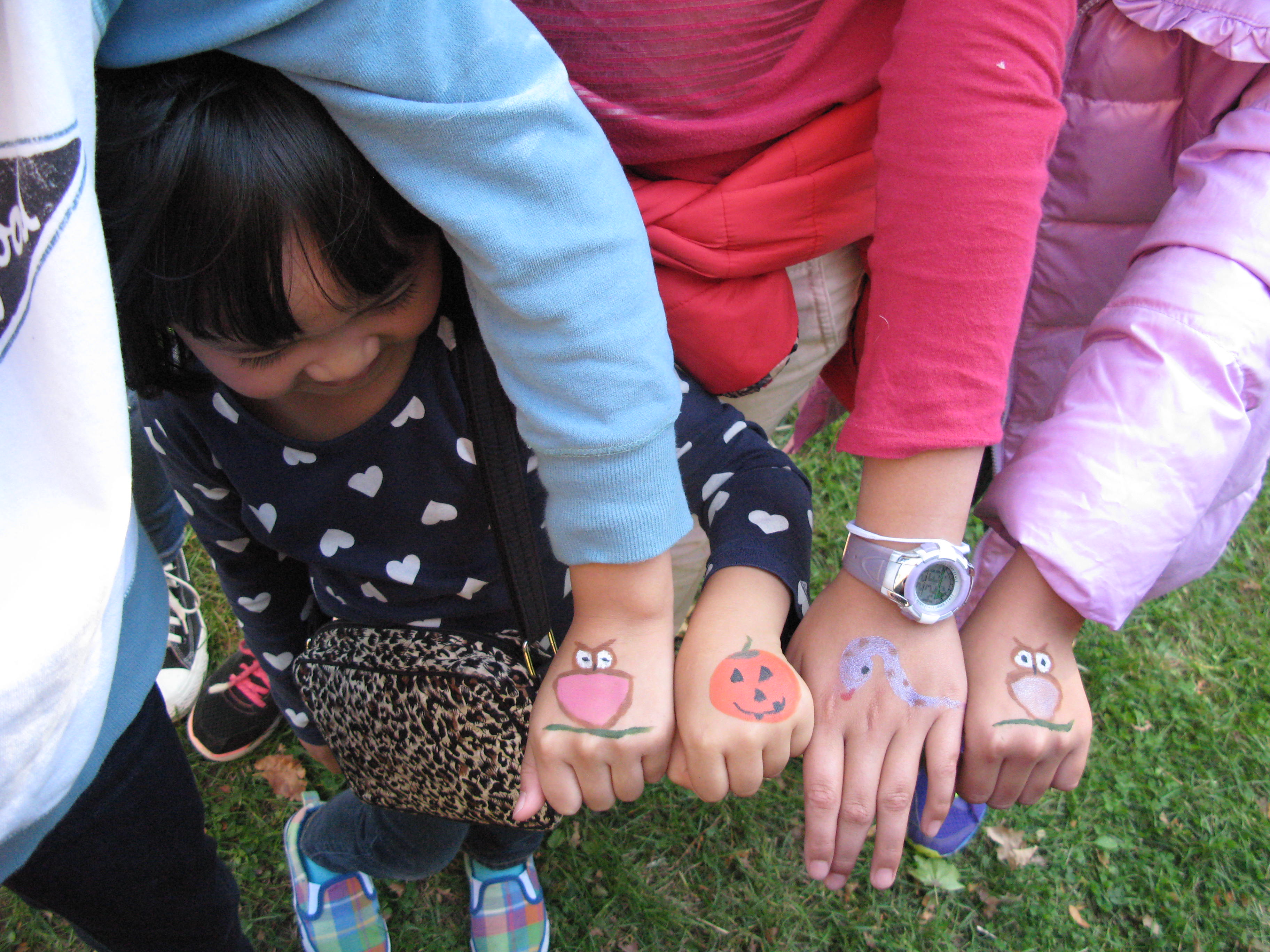