Thoughts about our Annual Report (and the municipal elections in Ontario).

Posted by Burkhard Mausberg on October 25, 2010 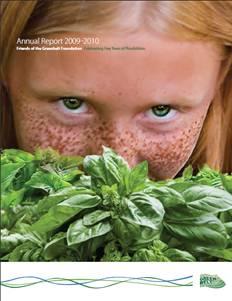 Last month, the Greenbelt Foundation released its annual report (seehttp://www.greenbelt.ca/webfm_send/887.)  We are certainly proud to have accomplished so much in a year, and while the Report is full of successful Greenbelt stories, one aspect of the Foundation perhaps needs more elaboration.  That’s our fiscal accountability and success. Talking about finances is a timely topic, as the one theme that has united voters across the southern Ontario region during this municipal election is greater fiscal accountability.

In my job as President of the Greenbelt Foundation, I am proud to have shown fiscal accountability. Allow me to look back on five and a half years of sound fiscal management:

-          Throughout our five years we spent less than 6% of our expenses for administrative and operational costs. In other words, the vast majority of our spending goes towards direct programmatic impact.

-          As a charity, I often ask for donations and free stuff. For our recent Tour de Greenbelt as an example, Aeroplan was a very generous supporter of thousands of dollars worth of Aeroplan points which we could cash in for expenses accrued for the execution of a successful Tour de Greenbelt. Similarly, Enbridge made a cash donation as well as donated their community van and staff for four days to cook and barbeque the great Greenbelt food we served.

-          Finally, in dealing with suppliers for various services, we also make the effort and insist on reduced fees from our suppliers. We rarely pay full price but negotiate with our suppliers simply because the Greenbelt is a terrific cause and they agree with the goals of the Foundation.

So, seeing the surge in the voters for greater fiscal accountability is a desired and reasonable expectation. If there is one caveat, I am disappointed that so much of the debate only centers on fiscal accountability. Municipal election debates should also focus on building liveable, healthy, prosperous and green communities. A vision for your town, your city, your region ought to include more than the obviously required fiscal accountability.

Friends of the Greenbelt Foundation