The fun began at Beamsville, which is not something I ever expected to experience in life. But turning left at Lincoln Avenue changed everything.

Until then, our little troupe of cycling pioneers had been bumping along the broken pavement of Old Highway 8 west through Niagara, squeezed between rushing traffic to the left and soft gravel to the right, and not much enjoying the strip-retail scenery one finds on the fringe of just about every Ontario town. But turning left to begin our ascent of the Niagara Escarpment was like riding through a smash cut in an action movie. Beauty erupted.

It was not as if any of us had doubted it: As volunteers helping to test-ride the new Greenbelt Cycling Route before the signs go up next year, we all knew this vision was there. But as I slowly ascended through the undulating, vine-draped bench lands in a damp mist, it was still a shock to me to realize just how vividly there it really was.

The same shock recurred throughout the week as our tour wound round the end of Lake Ontario, across Toronto's green roof and through the jumbled glacial drift of Durham Region to Northumberland County in the east. Yes, this deep green valley fed on all sides by tumbling waterfalls and echoing with birdsong is Hamilton. And no, that long-settled, barn-dotted farmland rolling so comfortably over hill after hill to the horizon is not the Cotswolds – it is Oshawa.

Such wonders never cease on the Greenbelt Route – partly, as every cycle tourist knows, because we were riding our bikes. Landscapes that disappear behind the window glass of a speeding car envelope the cyclist. They smell, they speak, they make you suffer and sing. But the real wonder was to circle the rim of this sprawling megalopolis without ever realizing it was there. It was as if the whole region had turned inside out and revealed itself in its true guise as a massive forest – with a rumoured city somewhere off in the distance.

Connecting the historic village of Queenston on the Niagara River with the Alderville First Nation on the south shore of Rice Lake, the proposed route is a 600-kilometre meander that only rarely – and for short stretches – uses roads where the speed limit is as high as 80 kilometers an hour. Although it roughly parallels the Waterfront Trail that preceded it, the Greenbelt Route is its opposite in almost every way, being almost completely rural and constantly, even heavily rolling. 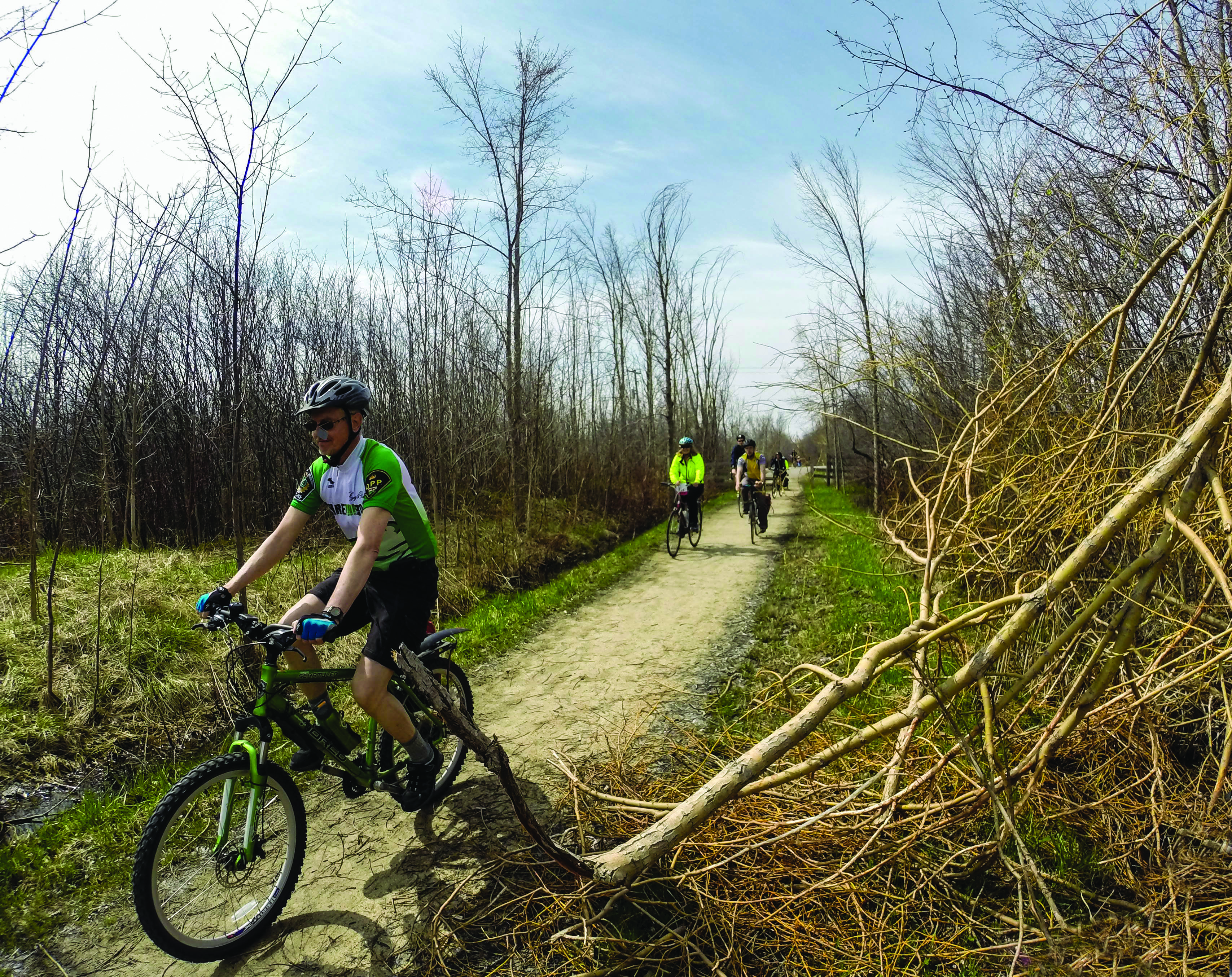 Anyone who thinks this country is flat will quickly discover otherwise as the route swings east off the escarpment and follows the spine of the Oak Ridges Moraine for its entire knee-wracking, lung-busting length – often on arrow-straight roads that defy topography as they climb straight up and down the steepest hills. To be a direct victim of the 18th century colonial administrators who devised this undeviating grid is a novel experience for the 21st century cyclist.

In that and so many other ways, riding the Greenbelt Route is like being transported into a completely different world for a week – your world, as it turns out.

So often overlooked by cottage-bound urbanites, the borderlands that now make up the Greenbelt have always been a recreational paradise. There are more than 40 golf courses on the Oak Ridges Moraine alone, and dozens more elsewhere in the Greenbelt. No geography in Canada is more densely latticed with hiking, ski and mountain biking trails. When signs identifying the Greenbelt Route go up next August, Sunday drivers stand to benefit as much as cyclists. More than just a luxe amenity for cyclists, the new route will cement the region's identity as a near-at-hand Mecca for nature-seeking urbanites.

There is no admission charge to the Greenbelt – equal and unfettered access to its hiking and biking routes makes it an economic leveller – but there is untold opportunity for the local tourism industry. Bicycle touring alone is already worth $300 million a year in Ontario, and the Greenbelt Route is ideally located to take advantage of an enormous urban market.

The cycle route is the creation of staff at the Waterfront Regeneration Trust, whose success in building their own trail has made them the reigning experts in the art of wrangling road space for bicycles in southern Ontario, and it will open officially next August with a “special edition” of the Great Waterfront Trail Adventure, a popular tour that normally follows the lakes. The trust is currently finalizing negotiations with local municipalities to make sure the new upland route is safe and well marked, and at the same time exploring loop trails and connectors that will ultimately transform the two routes – Waterfront and Greenbelt – into a regional network.

The effort has already produced an excellent series of detailed maps, available online at greenbeltcycles.com, that are more than adequate to guide tourists intent on beating the rush.

But the rush is already on. We felt it intimately last spring as our tour wheeled along, becoming a kind of procession, gaining momentum from “fellow travellers” who joined to ride individual legs, and winning the attention of cycling clubs, volunteers, planners and politicians in every municipality along the way. None doubted the value of the new route or the place of bicycles on the road. The excitement was palpable.

Every day began with a breakfast seminar in a new town where local officials showcased their own cycling plans. Tour participant Jean-François Pronovost of Vélo Québec set the standard and offered inspiration with stories of his group's spectacular success in creating a North American cycling Mecca. Seventy-something Peter Delanty, former Mayor of Cobourg, rode along with us much of the way and entertained at every stop. A fully Spandexed Steve Parish, Mayor of Ajax, guided us through Durham Region.

At a breakfast seminar in Hamilton, dozing cyclists were shocked awake by a super-informed, hopeful analysis of provincial cycling policy by a woman named Eleanor McMahon, founder of Ontario's Share the Road Cycling Coalition. And we weren't the only ones impressed: Not long after our tour, McMahon joined the Wynne government as the first non-Conservative MPP elected from Burlington in more than 70 years.

We rode with the growing confidence that we were onto something. Local cyclists have already claimed the territory, and dozens of semi-official loops are already forming around the spine of the Greenbelt Route. For every local government still resisting the two-wheeled movement, there are six posting “Welcome Cyclists” signs on their borders.

Ultimately it will be more than cyclists who benefit from the Greenbelt Cycling Route. With time and use, it will grow to become the defining characteristic of a brand-new landscape – one that was always there, but rarely seen as the treasure it is.