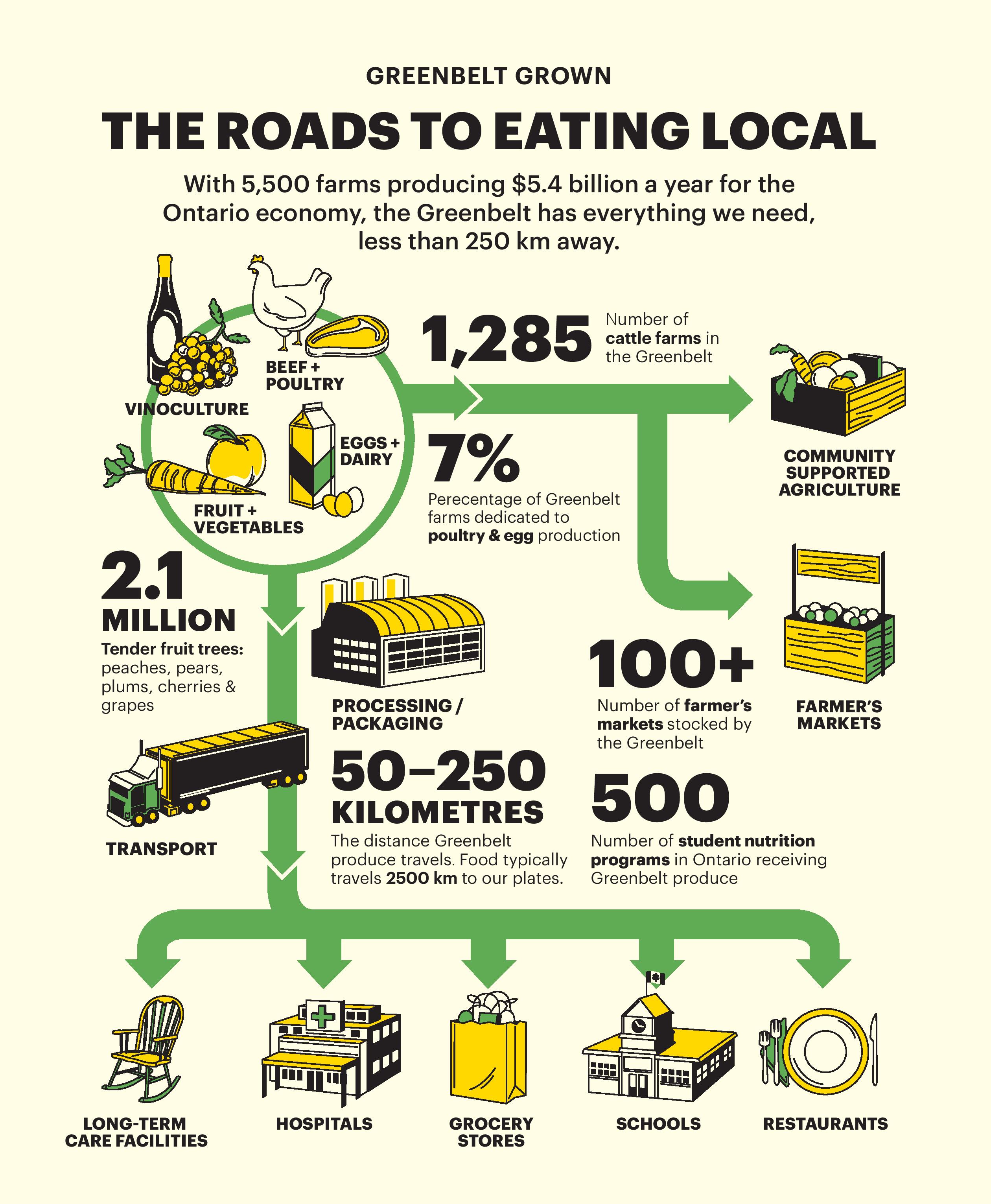 Can our fresh food’s journey stay short for long?

Ontario’s Greenbelt farms produce a great variety and abundance of food, but certainty is not on the menu

In the second installment of a six-part series, journalist John Barber traces the food trail from the Greenbelt to our plates.

The view from the hills near the village of Enniskillen is gorgeous in every direction, and on a clear day from some heights you can see a miniature Toronto glinting romantically in the distance. But every afternoon and morning, the city extends and retracts its tentacles: Streams of cars travelling so close to one another on rural roads that from a distance they resemble metallic segmented worms nefariously strangling the open countryside.

“I've had to wait for 35 cars to pass before I can get out of my driveway,” says local farmer Eric Bowman. At 64, Bowman remembers when the best farmland east of Toronto was Scarborough. But the wave of development that engulfed those fields is now lapping at the edge of his own hilltop farm.

When Bowman finally does get out of his driveway, commuters stuck behind him fume at the pace of his tractor. “They're in a big hurry to get nowhere and I'm in a slow hurry to get somewhere,” the lifelong farmer explains. “I get a lot of one-finger waves.”

As it is on every advancing frontier of the 100-mile city, the pressure on the uplands of Durham Region is relentless: Although the extension of Highway 407 further eastward from Toronto will relieve local roads in the near term, letting Bowman and his neighbours out of their driveways, it has already removed 3,500 acres of top-quality, Greenbelt-protected agricultural land from production in Clarington, the township where they farm. And where new highways go, new development almost always follows.

“That scares me – that everything below 407 could become a city,” Bowman says.

The same week we talked, Durham council adopted a report asking the province to implement the first few dozen of the thousand cuts that will ultimately, inevitably, produce that result. All that's standing in the way is provincial legislation, the Greenbelt Act, which is due to be reviewed in 2015.

“The Greenbelt is so important to protect farmland, green space or whatever you want to call it,” Bowman adds. “But governments change, so things can happen. One signature could end it all.

But Greenbelt farmers are not without allies, political and otherwise. For Bowman and many others, the most important of them are new customers who clog those same roads in search of fresh, local food. As much as it has changed menus in trendy downtown restaurants, the local food movement is building opportunity in the Greenbelt.

“It's unbelievable all the people who are coming in,” Bowman says. “There's been a big-time increase in interest. I'm picking up a lot of young people who want to know where their food is coming from.”

The same year the Greenbelt Act was passed, Bowman started a unique organic beef operation, selling freezer meat from his picture-perfect farm on the hill. Today he struggles to meet the demand, and his story is not unusual. The Geissberger family down the road is run off its feet trying to meet demand for Farmhouse Cider, which they make and package at individual orchards across the province with an ingenious mobile cider press.

Elsewhere, truck gardens are flourishing with the rise of weekly farmers' markets in every corner of the megalopolis. Some of those markets now feature high-quality VQA wine, most of which is made from grapes grown in the Greenbelt.

Eighty kilometers east of Bowman's farm in Bradford, on the edge of the famously fertile Holland Marsh, vegetable grower Larry Cohn is riding the same wave of interest in his Greenbelt-grown produce. “When we go to trade shows everybody walking by asks, 'Is your product locally grown?' It's so important to everybody, and it just fits right in for us. It just works really, really well.”

Cohn credits the province's Greenbelt Fund with having a “huge impact” in boosting demand for locally grown produce. “It really gives us an edge over people who are bringing product in from Quebec or the States,” he says. “We use it as an advantage because we're local, we're right here. Friends and neighbours and families are the ones who are doing this.”

What's more, they are doing it on a massive scale. There are about 5,500 farms located within the Greenbelt, and together they generate $5.4 billion in economic activity, according to one study for the Friends of the Greenbelt Foundation. Even before the Greenbelt became law, farm revenue in this rich hinterland was almost 25 per cent higher than the provincial average. Far from lying fallow, passively awaiting its final cash crop of estate houses, the Greenbelt is a vital economic presence.

Renewed interest in local food is not the only source of opportunity. While Ontarians overall spend 10 per cent of their household food budgets on fresh produce, Asian and South Asian households spend more than 30 per cent. In response, plant scientists at the Vineland Research Station in Niagara are co-operating with local farmers to research and develop promising “world crops” that can be grown in southern Ontario on the edge of the omnivorous city, replacing imported produce shipped from thousands of kilometres away.

“There's even money in apples again,” says Eric Bowman, noting that some farmers are investing $10,000 an acre to plant orchards with formerly exotic new varieties for urban consumers willing to pay a premium price. If he was younger, Bowman adds, he would jump back into his father's business – pigs – raising them with the same ingenious pasturing methods he uses to produce organic beef. “That's going to be huge,” he predicts.

Or perhaps not. Although he is a strong supporter of the Greenbelt, Bowman can feel the pressure on his land with every rush hour. And he has little faith that a tiny minority of farmers – two per cent of the population – can stand alone to preserve the land they need to thrive. So every customer who comes for brisket gets a free education in the importance of preserving what's left of the finest farmland in Canada.

“I hope this is farmland forever, because we've got to feed our country,” he says. “Our politicians don't know that yet, but someday they will.”