Fresh Water in a Changing Climate

Ontario has 250,000 lakes, containing about one-fifth of the world’s fresh water. Unfortunately, this unique offering could be undermined by climate change.

It goes without saying that water is a necessity for life. But it’s also an important part of our well-being and happiness. Whether it’s hiking along rivers, swimming in lakes, fishing in streams or building sandcastles at a beach, water-based recreational activities are a significant part of our cultural heritage as Ontarians.

Unfortunately, climate change is having profound effects on watersheds across the province. Summers are getting wetter, but inconsistent rainfall also results in lengthy dry periods. Dry spells are compounded by warmer winters with less snowpack, contributing to low water levels in summer. Spring thaws often happen more suddenly, meaning there is less groundwater recharge and more runoff. And, as summers get hotter, water temperatures are also rising.

The recent history of intensive industrial and urban development in southern Ontario has also significantly impacted local water systems. Conservation Authorities have determined that the water quality in half of the rivers and streams assessed in the Oak Ridges Moraine and the Greenbelt area are degraded and at risk of further degradation, potentially exacerbated by future, unaccounted-for development and infrastructure projects.

Ontario has 250,000 lakes, containing about one-fifth of the world’s fresh water. Unfortunately, this unique offering could be undermined by climate change.

For this instalment in the series, Joyce Chau, Executive Director of EcoSpark, discusses the multi-faceted importance of water.

Read the full report below: 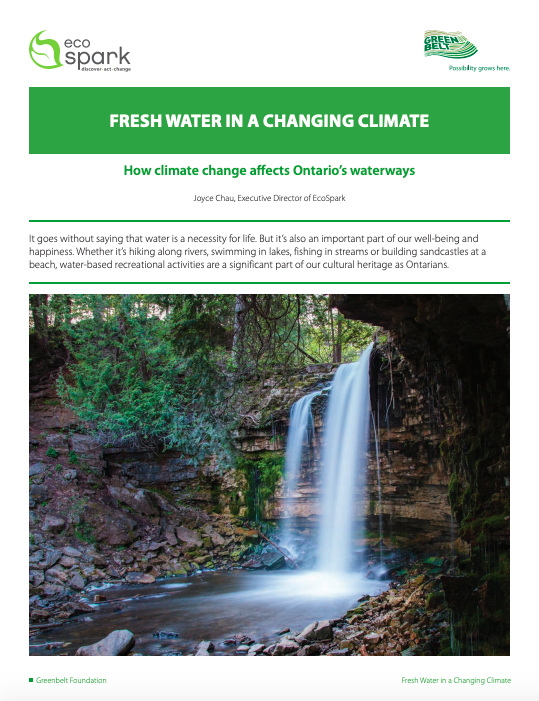