Stories from the Greenbelt: The 2021 Great Waterfront Trail Adventure 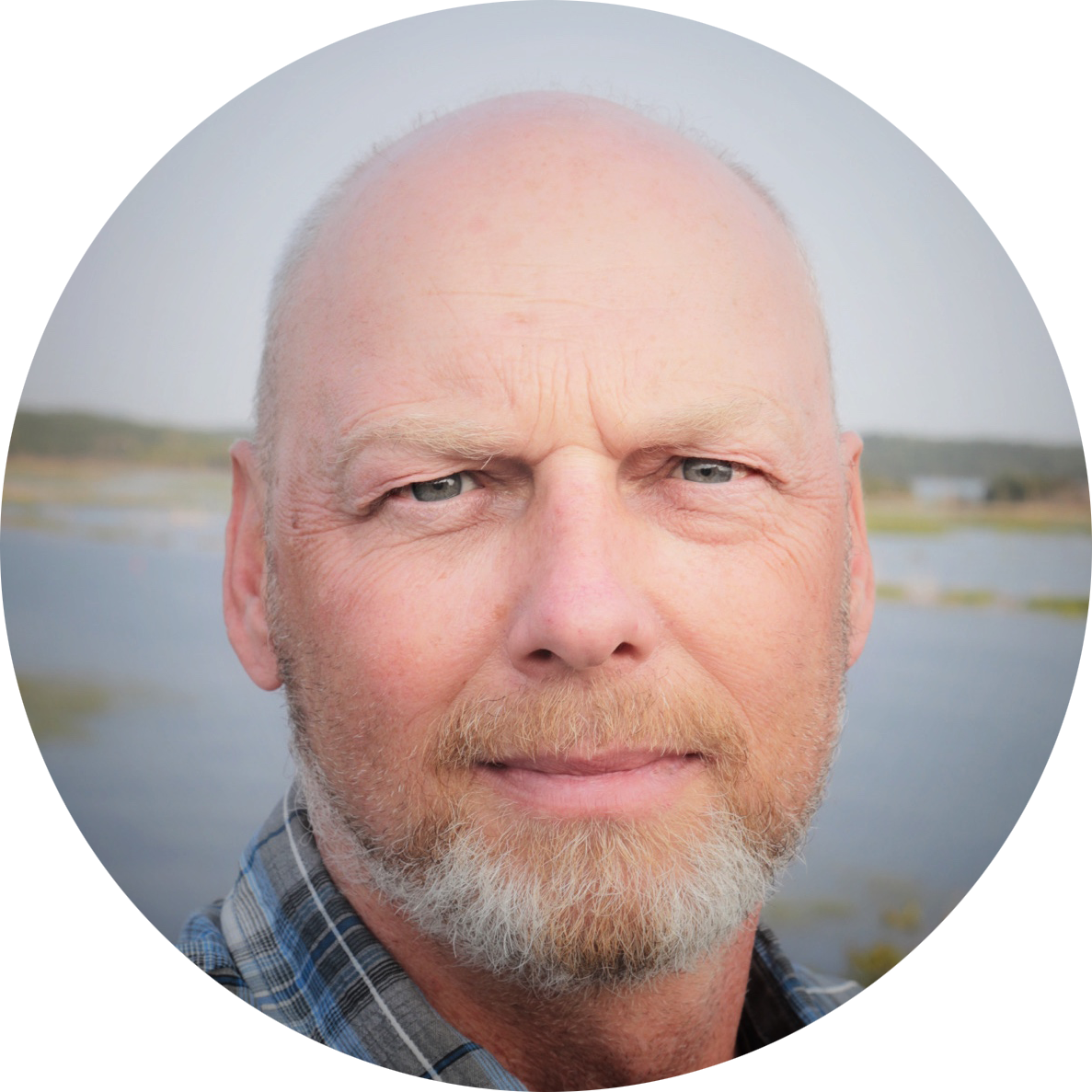 Everyone, start your engines! Actually, it's more like pump-up your tires and lube your chain! And so began the 2021 Great Waterfront Trail Adventure (GWTA), with 75 cyclists departing Blue Mountain Resort,   headed on a six day adventure to Point Clark..

Starting on Friday August 6, I had the pleasure of photographing this year’s adventure that explored 520 kilometres, 26 communities, and two of Ontario's finest recreational assets: the Great Lakes Waterfront Trail and the Greenbelt. This is my story of the ride. I hope you enjoy! 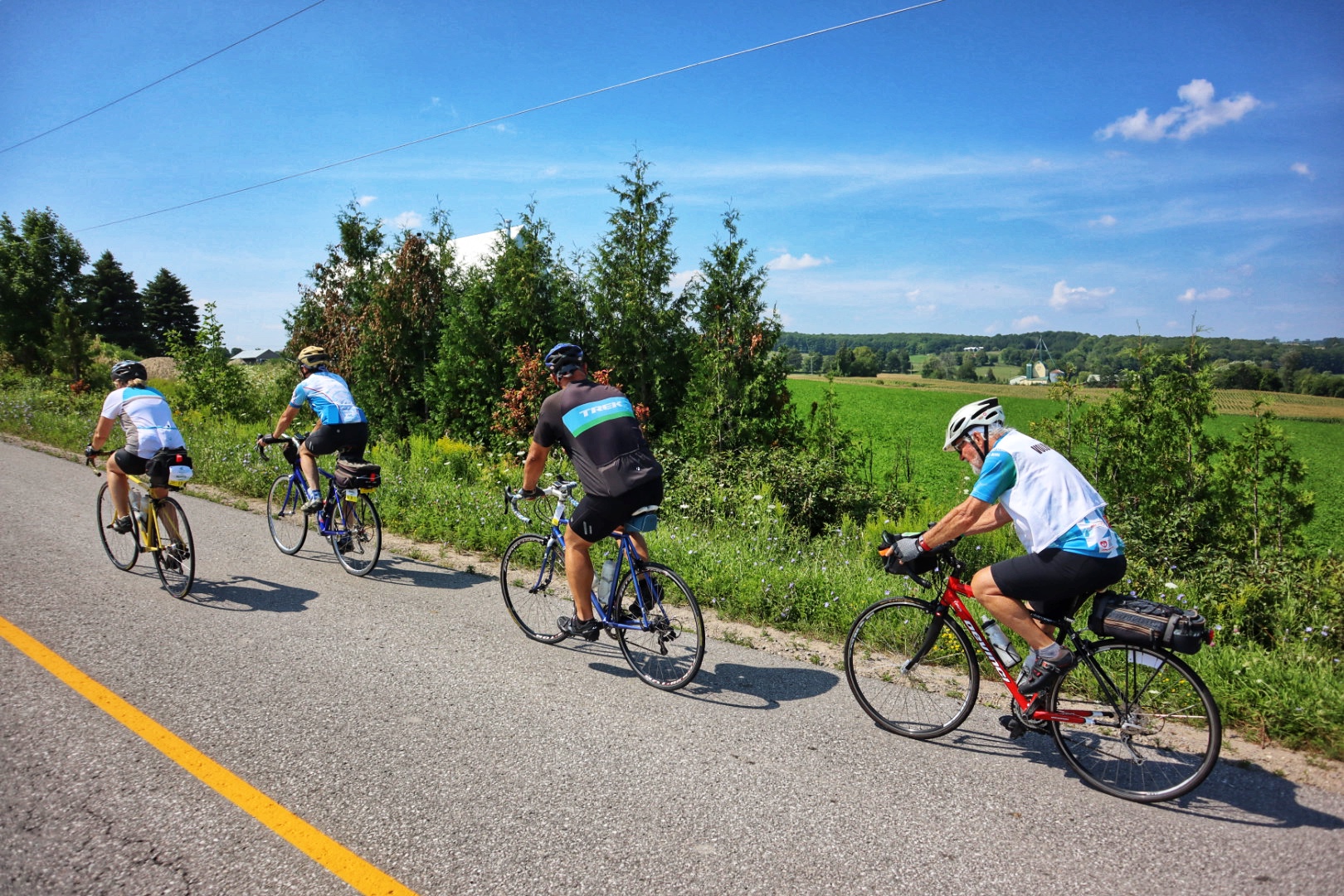 Slowly, the participants trickle into the restriction area. The hustle and bustle of the registration process is matched by the anticipation of the adventure to come. On the day's schedule, beyond checking in and collecting swag, is an optional 75-kilometre loop through Creemore and Clearview Township. The carrot at the end of the stick is the well-known hospitality of these must-visit towns. So, off the riders went!

Creemore Brewery provided samples of their beer, to go with tantalizing treats from local bakeries and eateries—all of which made the large hill leaving Creemore that much more of a challenge. Nonetheless, the hill was conquered and the loop was completed by all riders who set off on it! The day's achievements were celebrated with an evening out in Blue Mountain’s bustling village, followed by a good night's rest at the Blue Mountain Inn. 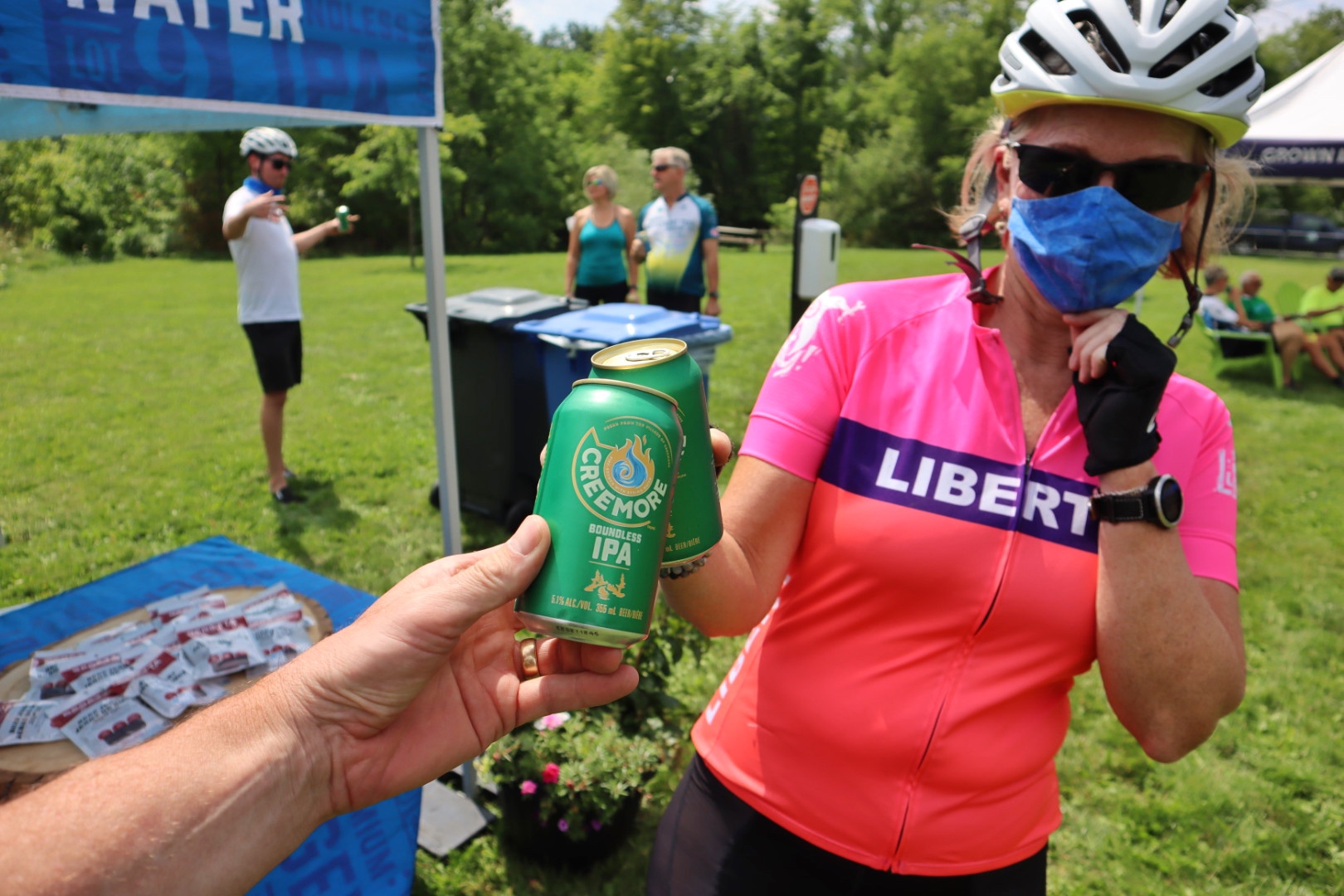 First off, there are some formalities to attend to! The GWTA is all about good times and this particular rendition also celebrated the expansion of the Waterfront Trail, adding another 600 km which are now signed and ready to enjoy.

Before we headed out on Day Two, there was a quick round of applause to the many people that worked many hours to make this year’s adventure possible. After a few speeches and photo ops, the riders were ready to go.

This day’s route followed the shore of the Georgian Bay. Along the way, we enjoyed a coffee in Thornbury, lunch in Meaford, and then we turned for the hills. Considering we are in a region of Ontario known as the Blue Mountains, it is no surprise that what comes next is a series of challenging ups and downs, many of which are made even more formidable by the road's gravel surface. Seventy-five kilometres later, we parked our bikes in Owen Sound.

In the evening, we reaped the rewards of the Greenbelt’s vibrant agricultural landscape, as we enjoyed a delicious meal prepared by local Chef, Shawn Adler. Chef Adler showcased local ingredients grown in the Greenbelt and served our dishes accompanied with beverages, which were also locally sourced. Thank you to the Greenbelt Foundation, Visit Grey Bruce Simcoe-RTO 7, and Chef Shawn Adler and his crew for a fabulous feast! 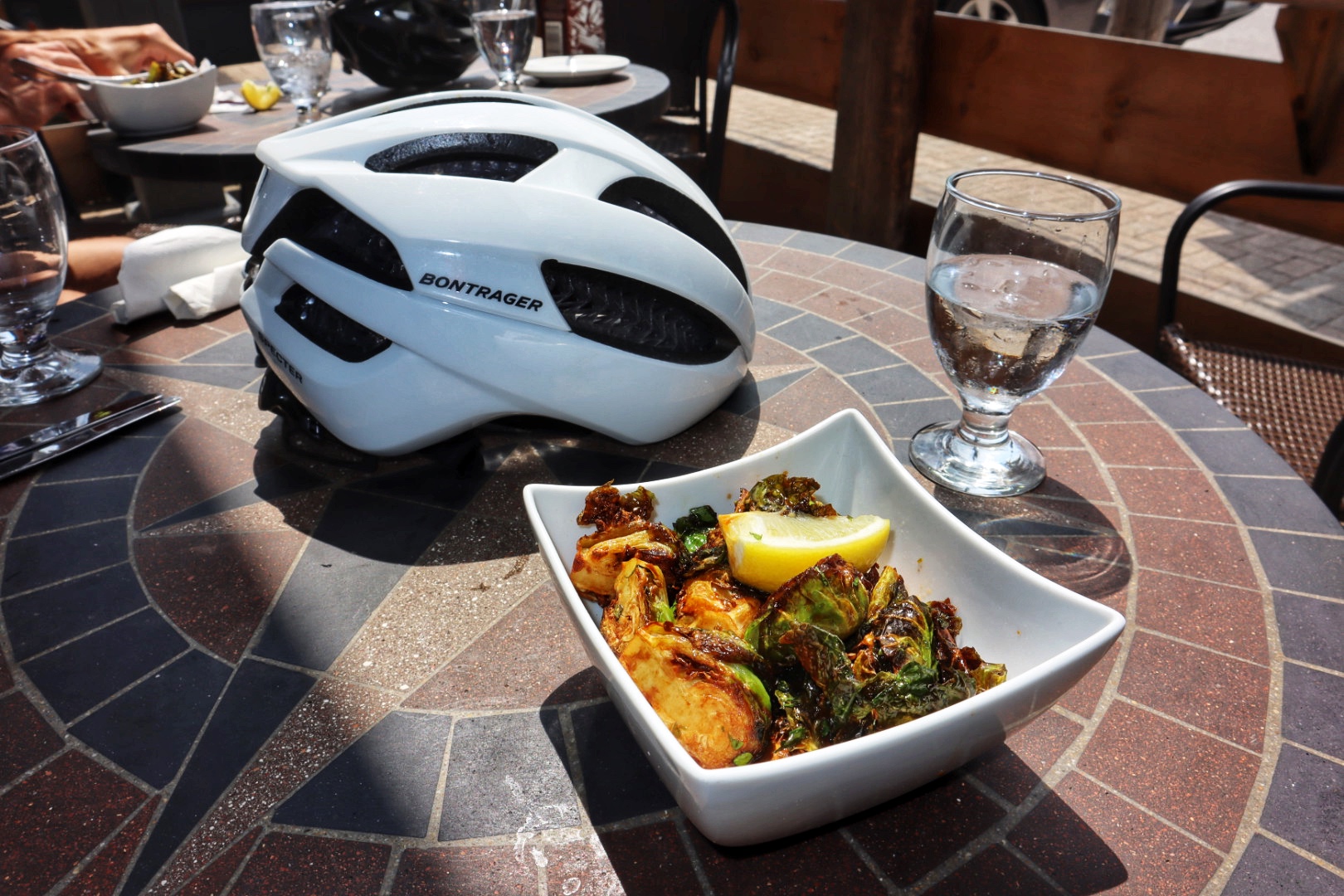 As we headed north to Wiarton on Day Three, the clear blue water of Georgian Bay glistened over our right shoulder. Wiarton can be seen from far across the water, but between it and our starting point in Owen Sound were 90 kilometres of pavement and maybe a few hills to traverse. Not to worry, there was also the promise of ice cream and plenty of places for riders to stop.

The ice cream cones at the Big Bay General Store just outside Wiarton lived up to their tasty reputation and helped to fuel the final push into town, where we reenergized with some delicious food at Dockside Willie’s Bar and Grill. After lunch and 30 kilometres of rolling hills, we finally dropped our bags in the picturesque village of Lion’s Head for a two-night stay on the majestic Bruce Peninsula.

With Lion’s Head as our base, Day Four offered a plethora of options. We could ride a 35-kilometre loop and hit the beach; take in a longer ride to Tobermory and shuttle back; or, as myself and two dozen companions opted, take a guided hike with EcoAdventures to the world-famous Lion’s Head lookout.

The day was hot; the hike was not easy and things got sweaty. But efforts reap rewards, and the views upon arriving at the Lookout were amazing! As we step up to the edge of the 200-foot cliff, far below our feet the rocky shoreline meets the turquoise-coloured water of the Georgian Bay which transitions through all the shades of blue towards the horizon. A few kayaks paddle the shallows, mere specks from our vantage point, and far to our left, we can see the village of Lions Head.

As for the being sweaty part, it was dealt with by taking a cool dip in the turquoise water of the Georgian Bay.

In the evening, we gathered at Lion’s Head Rotary Club for another sampling of the Greenbelt's bounty, this time prepared by local Chef, Michelle Watson. You know the food is good when an unexpected rain shower drenches the outdoor setting, and everybody runs for cover, food in hand. 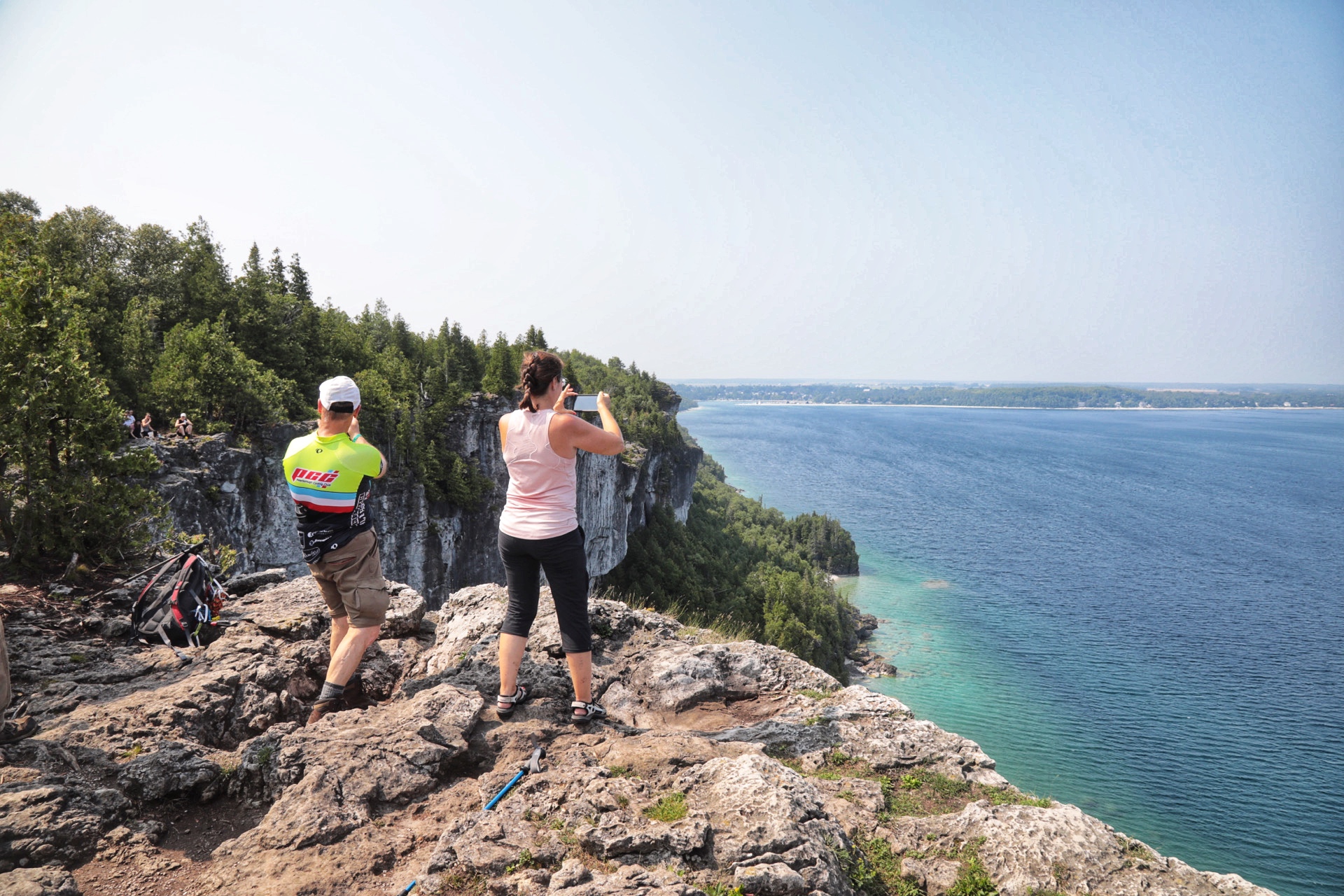 On Day Five, we said goodbye to the rocky shorelines of Georgian Bay and hello to the beaches of Lake Huron. We were chased by dark skies and bursts of rain across the Bruce Peninsula. While hills were few and far between, the wind was a challenge!

By the time we rolled onto the famous Sauble Beach, the skies were blue and riders were hungry. Lunch on the patio at Sola's Grill was delicious; a dip in the lake was so refreshing; and the selfie with the iconic Sauble Beach sign… well, that's for the scrapbook. Rejuvenated, the final push to Southhampton was a breeze. Literally. Yes, the wind was still blowing. 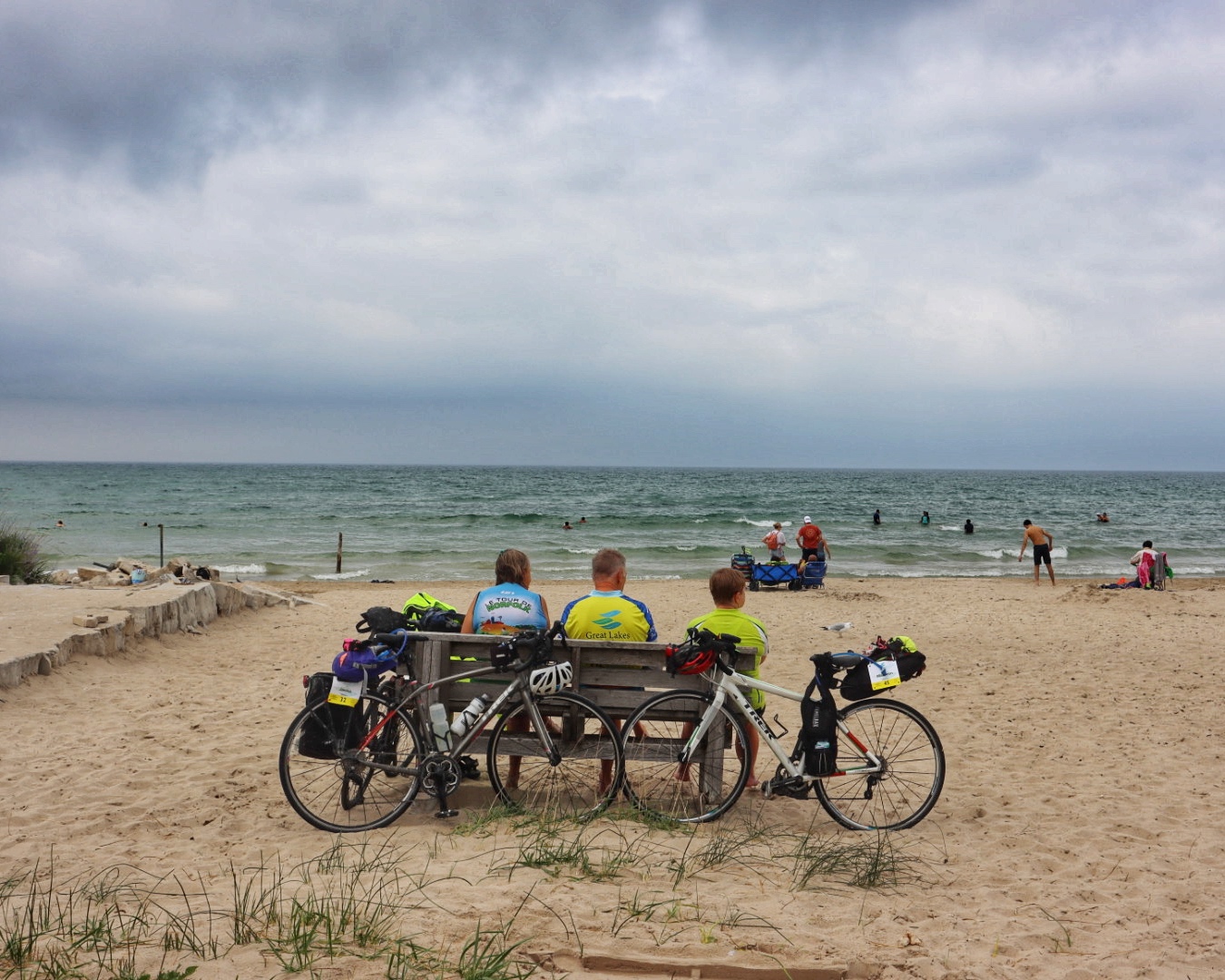 Day six was all about beaches and lake views. With its broad Main Street and beach town vibe, Southhampton deserved more time. But we had to roll on.

Morning grey skies faded to blue as we made our way south, often so close to Lake Huron’s edge that the riders could feel the spray from the waves. Each town we passed offered yet another beach and another reason to stay.

We had lunch in Kincardine, which as per usual, was good food, on a beautiful patio at Watercress Bistro, and as always, we took too long. The final push to Point Clark was challenging for two reasons; first, was sadness that the GWTA's end was near (but happy for rest ahead). Oh yes, and the wind returned.

Point Clark was a perfect setting for a perfect ending—with its iconic lighthouse as the background. There are no speeches or formalities here, just ear-to-ear grins of accomplishment on people's faces. Elbow bumps (COVID-safety first!) were exchanged, medals are presented, local butter tarts were eaten, and photos taken. Just like that, another Great Waterfront Trail Adventure is in the books. 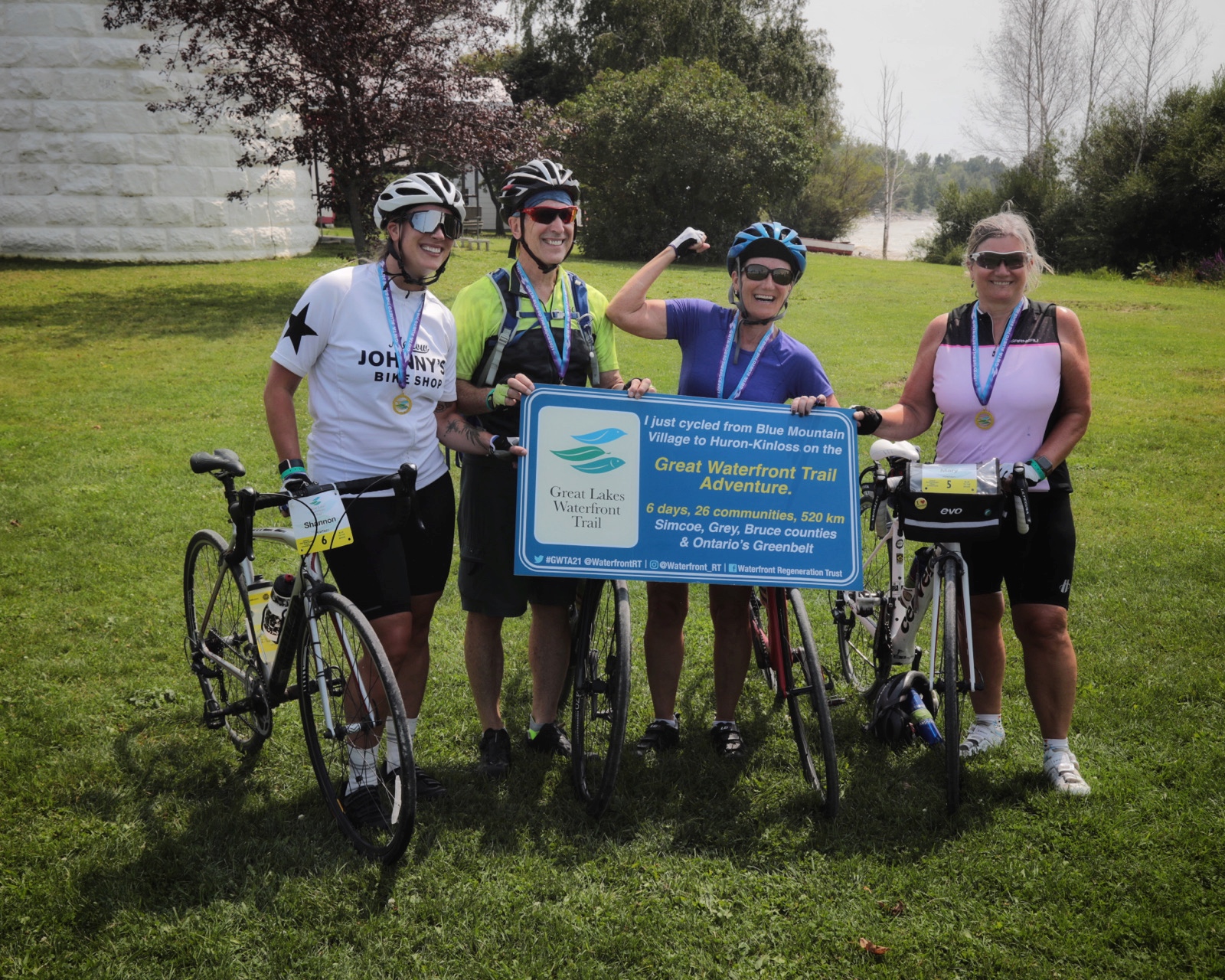 To the Greenbelt Foundation and the Waterfront Trail, thanks for the good times!

Now that the GWTA is in the books for 2021 and you got a taste of the Great Waterfront Trail Adventure and the spoils of Ontario’s Greenbelt, there is more fun to be had. Join our Great Lakes to Greenbelt Farm Fresh Tours planned for this fall. For all the details follow the link >  https://waterfronttrail.org/trip-ideas/farm-fresh-tours/