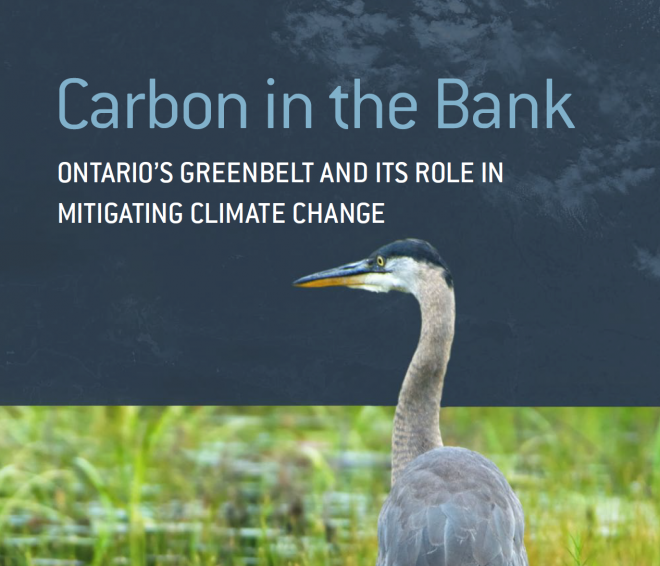 TORONTO - The David Suzuki Foundation released a study today that assesses the economic value of hundreds of millions of tonnes of carbon absorbed and stored in the internationally renowned Ontario Greenbelt — a relatively unheralded carbon storehouse estimated to be worth more than $2.4 billion.

The study, Carbon in the Bank, estimates that forests and wetlands within the provincially protected Greenbelt keep an estimated 172 million tonnes of greenhouse gases out of the atmosphere — locked away in its rich soils and vegetation. This massive amount of carbon is equivalent (C02e) to the greenhouse emissions released from Ontario's entire transportation, industrial, building, and electricity sectors combined.

"It is clear that the Ontario Greenbelt is an immensely important natural asset, and arguably one of Ontario's key weapons for tackling climate change, along with continued government and private-sector investments in green energy," said report author Ray Tomalty, principal of Smart Cities Research Services and adjunct professor in the School of Urban Planning at McGill University. "Safeguarding this storehouse of carbon not only preserves the agricultural and ecological health of our region; it is equivalent to the greenhouse gas emissions from the energy used to power 15-million households or drive 33-million cars for a year."

The Ontario Greenbelt is the world's largest urban greenbelt. It provides a bounty of essential ecosystem services; providing local food and award winning wines, efficiently filtering the region's air and water, and helping to keep nearby communities cool. Today's study highlights the additional importance of the Greenbelt as an instrument of fighting climate change by valuing, in economic terms, its massive capacity to remove and store carbon dioxide using internationally accepted methods from the growing field of natural capital economics.

"The health of our communities depends on the ability of the Greenbelt's forests, fields and wetlands to continue to capture and store millions of tonnes of carbon, making them an important part of the solution to keep CO2 out of the atmosphere, and thereby do our bit to slow the pace of global warming," said Dr. Faisal Moola, director of Ontario programs for the David Suzuki Foundation. "Southern Ontario continues to be a hotbed of explosive growth, and we must manage our natural wealth by bringing nature into the equation."

The study examines a number of growing threats to the long-term ability of the Greenbelt to continue to serve its climate regulation function, including being home to hundreds of aggregate mines and quarries, sprawling urban expansion at its borders, and government plans to expand the existing network of busy highways that bisect the provincially-protected region.

"Studies have projected that the number of extreme heat days in Ontario will double in the coming decades unless serious action is taken to address climate change," Moola said. "Ontario's climate policies should be revised to strengthen our ability to protect and grow the Greenbelt's impressive capacity as a massive natural carbon storehouse in one of the fastest growing urban regions in North America."

Carbon in the Bank: The Ontario Greenbelt and its role in mitigating climate change